Following is a typical article from Silicon Valley’s newspaper, the San Jose Mercury-News, debating over which way of screwing America is better—by increasing diversity with incompatible cultures or by adding more skilled foreigners to the workplace in a time of terrible unemployment. The piece is more of the same old liberal/business propaganda we have seen for years. But it does have a nice graph illustrating how wrong-headed Washington’s system of legal immigration has become: 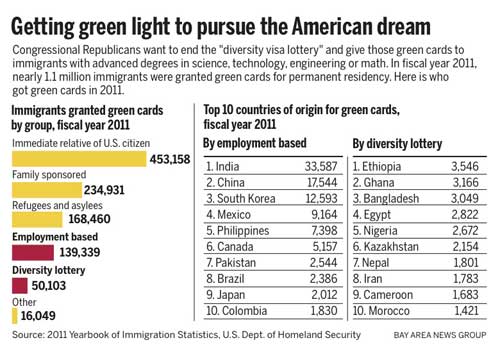 As the chart shows, the biggest number of newbies is kinfolk-based, so cultures with big families, e.g. Hispanics, are gaining in the ethnic proportion of who lives in the United States. Immigration plus lots of babies means rapid population growth.

In regard to employment-based immigration, tech-hiring expert Norm Matloff has written many times that the H-1b program is displacing capable Americans from jobs. In addition, California is still in double-digit unemployment, 10.2 percent for September, so the local angle is not exactly upbeat.

The diversity input machine (aka the federal government) continues unabated despite the inherent danger. In 2007, the GAO published a report (Fraud Risks Complicate State’s Ability to Manage Diversity Visa) which toted up the number of immigrants admitted under the program at nearly 10,000 persons from terror-supporting nations. See also my analysis of 2010 Diversity Visa admits from Special Interest Countries whose citizens get higher scrutiny regarding national security threats: Welcome, Unfriendly Foreigners!.

The Diversity Visa lottery should have ended immediately after 9/11. But if not, then the nations eligible should have been limited to those whose citizens are unlikely to present a national security threat, but that prudent step has not been taken either.

And take a look at the list of nations contributing diversity for 2011—how do Americans benefit from having additional thousands of Bangladeshis, Egyptians and Iranians?

A Bangladeshi man was arrested last week for plotting to bomb the Federal Reserve Bank. Plus, Egypt has recently elected a jihad-friendly Muslim Brotherhood government, and Iran is still run by Khomeini’s acolytes, now building nukes in order to become the top turbans in the region.

Why is Washington still so dim on the idea that the world is full of people who hate America and are therefore unsuitable as new immigrants?

Here’s an idea: why not chuck the Diversity Visa entirely and instead admit the same number (50,000) of Christians and Jews now residing in increasingly unfriendly Muslim nations, particularly Egypt and Pakistan, where non-Muslims are killed with impunity all the time.

Back to the current scribblings, even Vivek Wadhwa, one of the ethnic boosters quoted, noted, “I don’t think anyone would say that America lacks diversity.”

Really? So Washington can quit diversity-based immigration then. Good.

People around the world with accredited degrees in science and math should “get a green card stapled to their diploma,” Republican presidential candidate Mitt Romney said in his Tuesday night debate with President Barack Obama, who has made similar appeals to retain skilled foreign students.

Stewed over by lawmakers since 2009, the visa-stapled degree is a bipartisan idea that Congress has been unable to achieve. Election-year politicking brought a rare opening but then quickly shut the door to compromise this fall — specifically, whether to create more opportunities for highly educated scientists and engineers to stay in the United States at the expense of shutting down a random lottery of visas.

“Do we want to have 6,000 Iranians coming here or do we want 6,000 scientists and researchers?” U.S. Rep. Brian Bilbray, R-Coronado, asked on the House of Representatives floor. “Do we want over 2,000 Moroccans (or) individuals who have proved they have an asset?”

In other words, congressional Republicans said, the United States can award special green cards for permanent residency to foreign scientists and engineers or it can give out the visas in a random global lottery, but it cannot do both.

They sought to replace the “diversity visa lottery” with 55,000 visas annually granting permanent residency to immigrants with advanced U.S. degrees in science, technology, engineering or math, called the STEM fields. Most Democrats reject that choice, arguing that America has room for both visa programs. Neither Romney nor Obama has weighed in on the lottery side of the debate.

The House debate collapsed in late September in a hail of carefully calibrated finger-pointing but left open an important question: Should the country retain the most highly educated migrants by sacrificing a lottery that over the past 17 years has opened the door to thousands of people? Or do both?

Everyone expects the issue to return once the political season cools off.

“We should keep the great students already studying at Stanford and Berkeley and not worry about bringing in people who may or may not contribute to U.S. competitiveness,” said author Vivek Wadhwa, who has warned of a Silicon Valley “immigrant exodus” of talented entrepreneurs.

Attaching visas to doctorates and master’s degrees has bipartisan appeal and a strong constituency in Silicon Valley, but the diversity lottery has its defenders: people like Michael Shklovsky, whose Israeli florist parents got a break with the visa lottery that changed their family’s trajectory.

“They weren’t major professors or highly accomplished scientists,” said Shklovsky, 33, a civil trial attorney who lives in El Cerrito. “There was really no way for us to come in other than through a lottery.”

The diversity allocation was originally designed to help Europeans choked off in the 1980s by immigration policy favoring immediate kin of people already here. Today, nearly half who win the visas are from Africa. Defenders say the lottery is still the only legal immigration chance for the kind of plucky workers who historically defined American immigration.

Shklovsky was 16 when his parents won the visa, sold their Tel Aviv flower shop and moved the family to Contra Costa County in the mid-1990s. His father recently retired as a Martinez mechanic, his mother is a Montessori school head teacher and his brother is an assistant bank manager. “I’m really happy I’m here. I’m happy we left,” he said.

About 50,000 people win the lottery each year, a small slice of the approximately 1 million who come in, mostly through family ties or work sponsorships.

Lottery eligibility requires little more than a high school degree, and only those from countries with low rates of U.S. immigration can apply.

On the other side of the debate is Marcos Hung, 24, born in Argentina to Taiwanese immigrants and now working at Stanford Hospital on a soon-to-expire student visa. He applied for a diversity visa, but lost out — the chances of winning are about 1 in a 100.

“That’s why they call it a lottery,” said Hung, a bioengineer who already has his name on two patents.

His chances of winning a so-called STEM visa would be closer to 100 percent — he has a master’s in bioengineering from Rice University in Texas. Without it, he will likely go the more traditional Silicon Valley route — hoping an employer will sponsor him for a temporary H-1B visa, and eventually being sponsored for permanent residency — which can take many years and cost a small fortune in legal fees. Republican and Democratic legislators say they want to make it easier for people like Hung to get green cards, but they disagree on how to do it.

On the House floor, Lofgren described the Smith version as a “sinister” ruse to cut immigration while showing a pro-immigration GOP face before the presidential election.

Even some immigrant advocates who once endorsed the lottery argue that it has done its work by welcoming more than 800,000 people since 1995.

Garamendi said in an interview that he prefers to keep diversity visas — “it’s a value statement about who we are as Americans,” he said — but felt a need to compromise.

However, he said the Republicans set up the vote to fail by requiring two-thirds support instead of a simple majority. The tally fell 20 votes short, 257 to 158.

“That’s the game,” Garamendi said. “It’s sad, but that’s what most of this year’s votes were about.”

Other advocates for high-skill immigration say more Democrats should reconsider the “all-or-nothing” approach.

“Having diversity is important,” Wadhwa said, “but I don’t think anyone would say that America lacks diversity.”