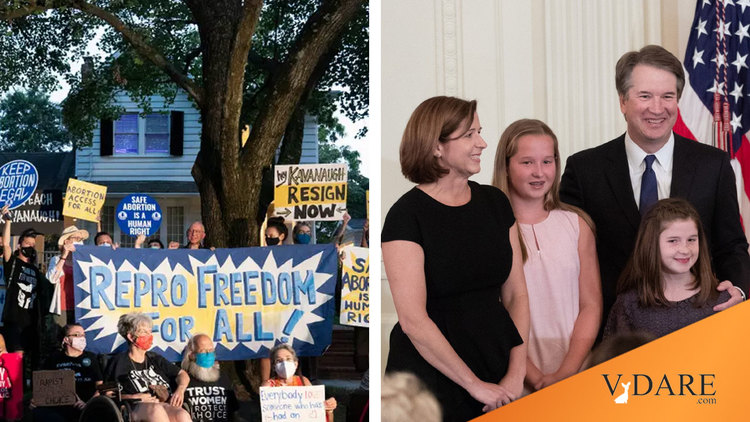 If the man who traveled to U.S. Supreme Court Associate Justice Brett Kavanaugh’s house in Chevy Chase, Maryland, with the intent to kill hadn’t called 911 to warn police, he might well have done it [Man with gun, knife arrested near Justice Kavanaugh's house, by Pete Williams, NBC News, June 8, 2022]. Then again, he might not have traveled there if Leftists hadn’t unleashed a farrago of hate and doxxed conservative justices because they will soon overturn Roe v. Wade.

Officials said the man had called 911. …

He was still on the phone with 911 when police showed up to arrest him, the complaint said.

[He] decided to target Kavanaugh because he was angry about the possibility that the Supreme Court will overturn Roe v. Wade and about the school shooting in Uvalde, Texas. He said he thought that Kavanaugh would loosen gun laws. Roske said he'd planned to kill the judge and then himself, the complaint said.

He girded himself like an Antifa black bloc terrorist. He had “black tactical chest rig and tactical knife, a Glock 17 pistol with two magazines and ammunition, pepper spray, zip ties, a hammer, screwdriver, nail punch, crowbar, pistol light, duct tape” and other items.

But forget Roske, and remember this: A pro-abortion outfit called Ruth Sent Us invited the attempt when it doxxed Kavanaugh and other justices, which fomented illegal protests outside their homes [Meet The Shady Left-Wing Group Targeting SCOTUS Justices And Their Families, by Tristan Justice, The Federalist, May 5, 2022].

Though illegal, police did not—as they should have—arrest the potentially violent crowd en masse.

Democrats and their Leftist propaganda machine, including the Mainstream Media, are pushing this violence. The question is when it ends in blood.

Today, an armed man was arrested outside the justice's house after issuing threats

I am sure it was just a coincidencepic.twitter.com/HIDWEupTcX