Jordan Sargent is a typical Gawker contributor, divvying up his time between speculation on Justin Bieber's sex life and point-and-spluttering about white Americans maintaining civilization.

Sargent was triggered by the story of one Clara Vondrich, who had been ruthlessly exploiting her white privilege by taking a business phone call on her iPhone while standing in line.  This combination of productivity and consumerism was obviously a provocation to a pair of diverse young gentlemen, who promptly stole her phone.

According to well-established codes of liberal white conduct, Vondrich should have rejoiced at this redistribution of wealth.  Perhaps she could have written a self-loathing note on Tumblr and accompanied it with a picture of her holding a handwritten sign.  Extra credit if there is a hashtag decrying "cisgenders."

Instead, this "white lady," in Sargent's contemptuous phrase, chased down the pudgier of the two thieves and held him until the police arrived.  Even more unforgivably, she posed for pictures with a nearby photographer, shaming the 13 year old petty criminal.

"Here's why that's a problem," as leftists say.   [The Millennial Generation Motto, Heartiste, February 23, 2014]  Organized under Gawker's category of "White People," which mostly decries hateful whites doing things like being annoyed at crime and political correctness, Sargent gives us the following: 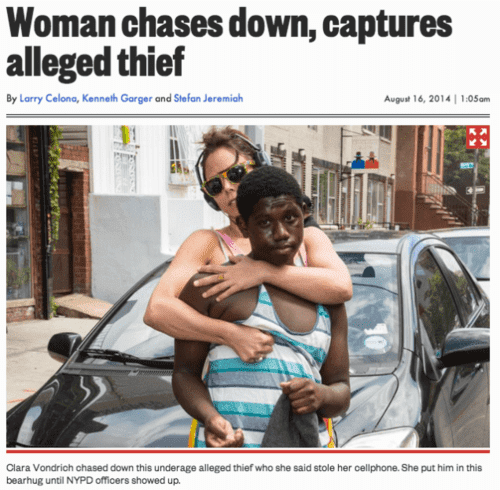 [I]f you are to apprehend your child mugger don't pose for photos in the newspaper, especially if you are white and the child mugger happens to be black. This is an extremely bad look, I think we all can agree.

[All The Things Not to Do When You Capture Your Own Child Mugger, by Jordan Sargent, Gawker, August 18, 2014]

Why?  Presumably, it might lead to people noticing uncomfortable (and neeedless to say, truthful) facts about race and crime.

After the little thief was taken by the police, Clara Vondrich posed for a solo photo.  Sargent says

No adult should feel the need to show up in The New York Post with a heroic smirk on her face after chasing down and hogtying a 13-year-old boy. This is a sociopathic desire.

The problem here is that Vondrich did not seek out random black children to "hogtie."  She was standing in line when her phone was stolen.  She chased the thief down and even offered $200 to buy her own phone back.  This did not work.  Disgustingly, even though she was yelling for others to stop the thief, she had to do it herself.

The New York Post photographer and reporters thought this was kind the action that should be encouraged and the point of the article is obviously to encourage emulation.  Sargent considers this sociopathic.  What is the correct action, in his view?

Now, granted, it's not entirely Clara Vondrich's fault that this 13-year-old boy was arrested by police for stealing her phone. But, she did, by her own admission, willingly cause the commotion that led up to police being summoned, and she did—as the photos show—keep the kid pinned to a car until police arrived despite already knowing that he didn't posses her phone.

Vondrich says that she "felt sorry" for the kid, but not enough to not have him arrested and charged with grand larceny. The boy will now enter New York's vaunted juvenile justice system, which will likely f*** up his life even further, simply because he snatched a white lady's iPhone in Williamsburg.

If you are nonviolently mugged by a child, continue to let him run along with his friends. The world will be a better place.

That's right.  The criminal is the victim. When people rip your property out of your hands in brought daylight let them go.  Especially if you are a "white lady."

Also, notice the size of this "child." 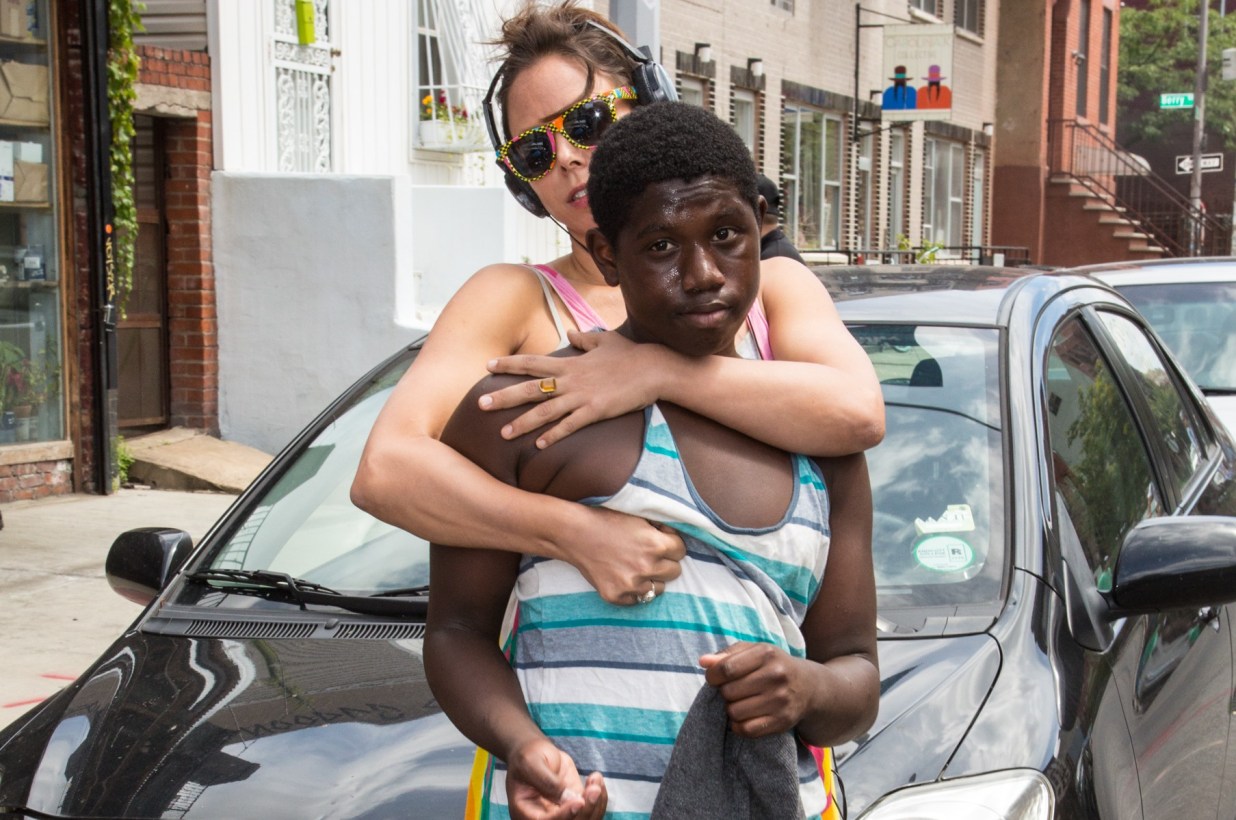 Needless to say, the "child's" mother falls into the typical pattern saying "he's a very good boy" and condemning the woman for having restrained her son, who was only "hanging out with the wrong crowd."

But this is the terrifying world of SWPL whites.  It's a world where if someone makes eye contact with you or doesn't use politically correct lingo, it's a microaggression requiring diversity training, careful behavior modification at corporations and colleges, and never ending campaigns to get Enemies of the People hounded and fired.

However, if it means a nonwhite criminal steals your stuff — well, that's just a joyous celebration of diversity.