Wednesday’s top headlines were a revealing expression of left angst over the government defending America’s law and borders, with some verging on hysteria:

The NYTimes included a front-page photo of deported foreigners, although they were all males; apparently no pictures of young mothers with cutesy kids being deported were available: 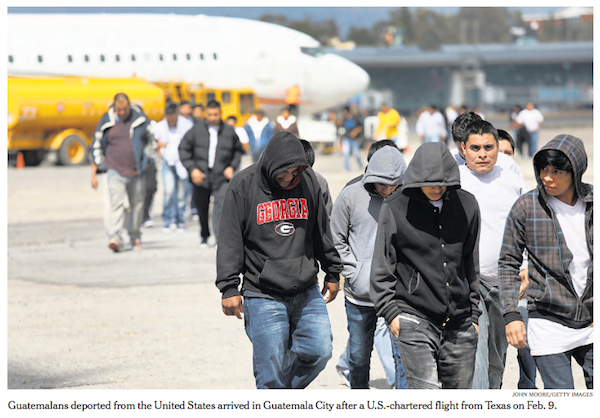 Curiously, Democrats and their media never complained when Presidents Clinton and Obama portrayed immigration enforcement as a positive for the American people and the nation-of-laws idea.

It’s welcome and long overdue to see criminal aliens targeted for removal. However, the cheapie long-term solution for the mass infestation we suffer is universal E-verify at the workplace (bill recently submitted by Senator Grassley) where illegal alien job thieves are disemployed. The foreigners come to steal American jobs, and when employment disappears they have no reason to stay and are likely to self-deport.

WASHINGTON — President Trump has directed his administration to enforce the nation’s immigration laws more aggressively, unleashing the full force of the federal government to find, arrest and deport those in the country illegally, regardless of whether they have committed serious crimes.

The new enforcement policies put into practice language that Mr. Trump used on the campaign trail, vastly expanding the definition of “criminal aliens” and warning that such unauthorized immigrants “routinely victimize Americans,” disregard the “rule of law and pose a threat” to people in communities across the United States.

Despite those assertions in the new documents, research shows lower levels of crime among immigrants than among native-born Americans.

But taken together, the new policies are a rejection of the sometimes more restrained efforts by former Presidents Barack Obama and George W. Bush and their predecessors, who sought to balance protecting the nation’s borders with fiscal, logistical and humanitarian limits on the exercise of laws passed by Congress.

“The faithful execution of our immigration laws is best achieved by using all these statutory authorities to the greatest extent practicable,” John F. Kelly, the secretary of homeland security, wrote in one of two memorandums released on Tuesday. “Accordingly, department personnel shall make full use of these authorities.” . . .