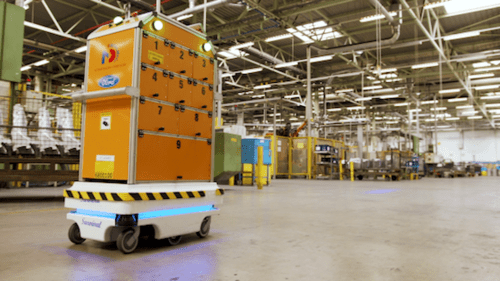 Here’s a new robot from the Ford company designed to work in its factories. It’s basically a filing cabinet on wheels that delivers replacement parts on the floor.

Below, Ford’s Survival robot consists of cubby holes for parts — each with its own identifying number on the door. 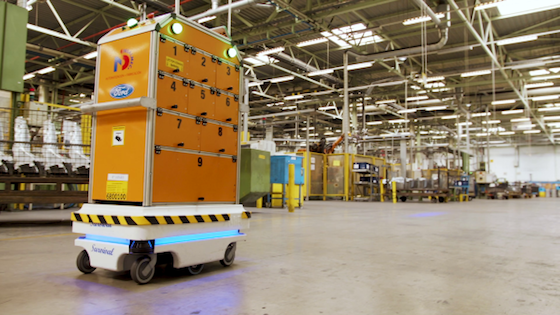 Users in the Valencia, Spain, plant report success with the machine, and the company may expand its implementation.

As usual, workers are assured that the machine is there to “help” them, not replace them. Plus, it’s entirely too cute when a manager refers to the gizmo as a “valuable team member.”

The Ford delivery robot is a simple thing, but it indicates a much larger trend in business. Remember that industry is not spending millions overall in its automation redesign to make work easier for employees; the change is to save money. And when smart machines become cheaper than workers, then the humans will be laid off.

As the work universe changes, First World nations like America won’t need many (any?) Third World migrants/aliens to work cheap and simple because machines will do it better.

Note how the article below includes a couple job loss studies associated with automation:

Here’s the autonomous robot Ford built. It’s one of the company’s newest employees at a factory in Spain, CNBC, May 9, 2019

• The robot made its debut at Ford as workers around the world become increasingly worried their jobs will one day be stolen by technology.

The self-driving robot uses lidar (light detection and ranging) technology to visualize its surroundings and deliver spare parts to where they’re needed in the facility. It was manufactured by Ford engineers and is the first of its kind to be used at one of the company’s European plants.

“When it first started you could see employees thinking they were in some kind of sci-fi movie, stopping and staring at it as it went by,” Eduardo García Magraner, manufacturing manager at the Valencia factory, said in a statement. “Now they just get on with their jobs knowing the robot is smart enough to work around them.”

The robot made its debut as workers around the world become increasingly worried their jobs will one day be stolen by technology.

Nearly half of the world’s jobs face some risk of being automated, according to research by the Organisation for Economic Co-operation and Development. A Brookings Institution report warns that a quarter of Americans are at high risk of losing their jobs to automation.

Workers in food services, manufacturing, administrative support, farming, transportation and construction have the greatest likelihood of being replaced by robots.

In 2018, a record number of robots were put to work in North America. According to the Robotic Industries Association, 35,880 robots were shipped to the U.S., Canada and Mexico last year, with 53% going to the automotive industry. (Continues)