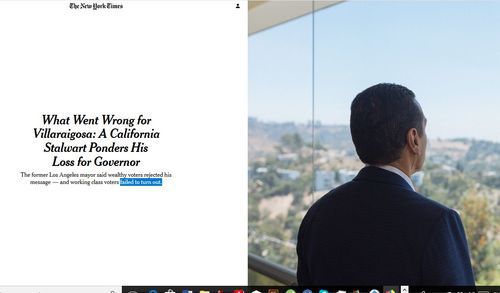 What Went Wrong for Villaraigosa: A California Stalwart Ponders His Loss for Governor

LOS ANGELES — Antonio R. Villaraigosa was the high-riding mayor of this city for eight years. His election as its first Latino chief executive in modern times was an electrifying moment. Mr. Villaraigosa, a Democrat, has over the years expressed high ambitions for his future: a cabinet secretary in a Hillary Clinton White House. Governor of California. A next-generation leader for Latinos across the nation.

But Mr. Villaraigosa saw those ambitions dashed last week in a dispiriting third-place finish in the primary for governor of California, a showing that not only eliminated him from contention for that office — but probably, as he acknowledged in a ruminative interview at his home in the Hollywood Hills on Wednesday, from elected life.

He drew just 13 percent of the vote after a campaign calling for California to confront an economic divide that he warned threatened its future. It was a stunningly poor showing given the arc of his career: City Council, State Assembly, Assembly speaker, mayor, chairman of the 2012 Democratic National Convention. And it came even after charter school advocates financed a $23 million independent campaign on his behalf.

Villaraigosa is a complete mediocrity who failed the bar exam all four times he took it. He was basically an overgrown juvenile delinquent who was in politics for the Laker tickets.

That he was endlessly promoted by the national media as the Great Mexican-American Avenger says a lot about 21st Century media myths and electoral realities.