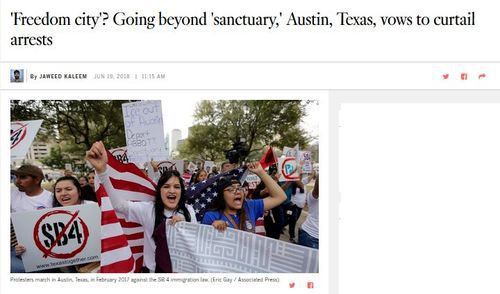 … The other resolution directs police to avoid arrests for misdemeanors, including those for smoking marijuana, having drug paraphernalia, and taking part in petty theft — crimes that city data shows frequently end in arrests of black and Latino residents.

Petty theft is up to $50 in Texas. So basically shoplifting has been effectively legalized in Austin.

While Austin is among the country’s first so-called freedom cities, it’s part of a wider movement around decriminalizing low-level offenses and decreasing arrests. According to Local Progress, a national network of progressive city officials, some council members in El Paso and Dallas are also considering “freedom city” proposals.

“Poor people of color in our city are over-punished and over-incarcerated,” said Greg Casar, an Austin City Councilman who pushed for the resolutions. “If people are being arrested less, we can also prevent people from being put in the deportation pipeline.” …

Jaweed Kaleem is the national race and justice correspondent at the Los Angeles Times, where he writes about how race and ethnicity shape our evolving understanding of what it means to be American. He frequently reports on policing, civil rights, immigration, prisons and religion, among other subjects. At The Times, his reporting has taken him to Virginia to write about controversies over Confederate monuments, Texas to tell the story of the nation’s only Spanish-speaking mosque, Montana to cover debates over refugee resettlement, and Michigan to explore the rise of black police chiefs. Before joining The Times, Kaleem was the senior religion reporter at HuffPost for five years. From 2007-11, he was a reporter for the Miami Herald. He attended Emerson College in Boston and grew up in Northern Virginia.