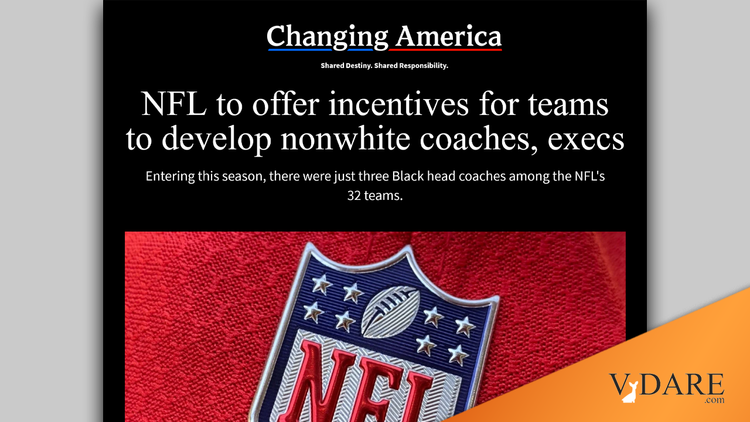 We all know where this is headed…

NFL to offer incentives for teams to develop nonwhite coaches, execs: Entering this season, there were just three Black head coaches among the NFL’s 32 teams, The Hill, November 11, 2020

The majority-white owners of the National Football League have approved a proposal to incentivize teams to develop nonwhite coaches and executives.

“That just complements part of the overall collection of the things that we’re doing,” NFL Executive Vice President of Football Operations Troy Vincent told ESPN. “To try to increase mobility among in particular black coaches and females as well in the coach and the GM front. I’m looking forward to seeing what the offseason has to bring in the hiring cycle.”

If approved by the NFL Players Association, the change would reward teams with third-round draft picks if minority assistants and executives below the General Manager position get hired by other teams for higher roles, reported NBC Sports, with some stipulations.

Entering this season, there were just three Black head coaches among the NFL’s 32 teams (and four nonwhite coaches) and 14 Black head coaches in college’s 130 Football Bowl Subdivision squads. And while some coaches claim the NFL is a “meritocracy,” that does not account for the exclusion of nonwhite players and coaches in the early years of the NFL as well as the unique systemic challenges Black coaches face.

The NFL has made some changes this year, including expanding the ”Rooney Rule” by requiring clubs to interview at least two external minority candidates for head coaching openings and at least one minority candidate for any coordinator job. But the lack of diversity among final hires is often attributed to a lack of qualified nonwhite candidates “in the pipeline.” In response, Michael Locksley, head coach of the University of Maryland football team, established the National Coalition of Minority Football Coaches this year to help elevate nonwhite coaches in the sport.

Just make it illegal to hire white coaches in the NFL or white executives in the front office of the leagues 32 franchises. End the charade once and for all.