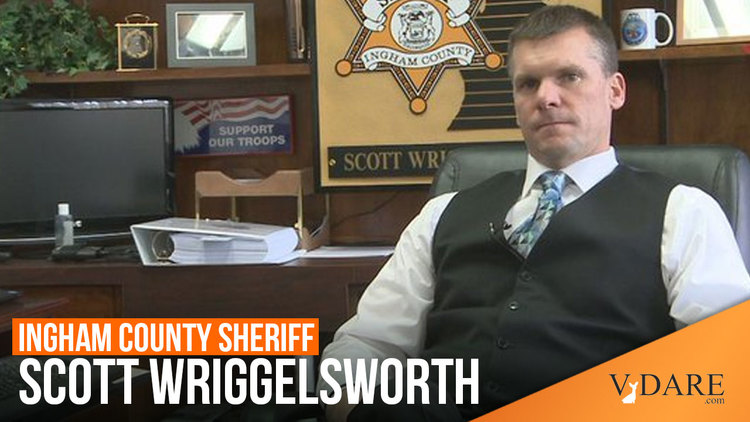 The white sheriff of Ingham County, which includes most of Lansing, Michigan, dared point out gun violence is a BIPOC on BIPOC phenomenon…meaning white people need not apply.

For noting black people are the primary people shooting other black people, he had to apologize.

LANSING, Mich. — Lansing Mayor Andy Schor and other elected officials held a press conference to address the wave of gun violence in the city. Some in attendance took issue with comments made by Ingham County Sheriff Scott Wriggelsworth.

Pastor Terrence King is a part of the Assembly of Lansing Pastors, a group that has come up with ways to fight gun violence in the city. King said while most of the press conference went well, he was uncomfortable with comments made by Wriggelsworth.

“While there was some data given as a result of Black on Black crime, what wasn’t mentioned, which would have been more balancing, was to mention the crime happening on all citizens and all ethnicities,” King said.

King wasn’t the only one who took issue with Wrigglesworth’s comments. Community activist Melik Brown was at the press conference and publicly called Wriggelsworth out.

“We need to find solutions on how to end 2021 on a strong note and my words on Monday did not do that and I apologize if my words hurt anyone,” Wriggelsworth said.

King said he understands people make mistakes and a lot of mistakes can be corrected, if a conversation is had, and both parties understand each other’s viewpoints.

“Because I am African American, I can help him understand a bit more about the culture and perhaps clear up some biases he may have that may have caused him to think and say the things he did during the process conference,” King said.

Black individuals commit the bulk of the gun violence in Lansing, Michigan. How hard is this to admit?