The Los Angeles Times is quite a case study in devolutionary “outreach” to diverse new communities of immigrants. Monday’s front page pictorial story (below) featured a downtown Mexican-style farmacia catering to primitive cultural practices as if they were a normal thing to have in a major American city. The Farmacia Million Dollar offers a multi-service magic hut where customers can purchase amulets or spiritual cleansings and pray to Santa Muerte, the Saint of Death, much admired by Mexican criminals. 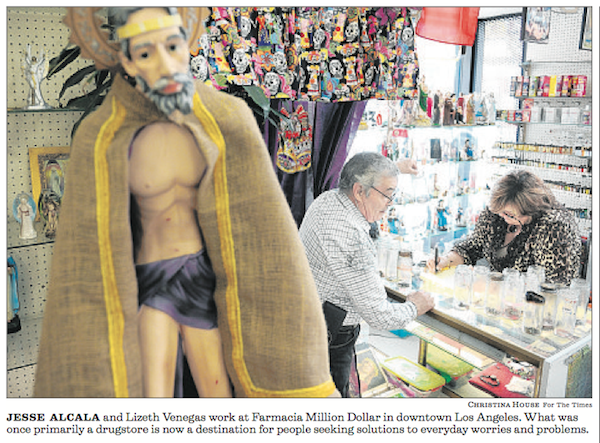 Below, shoppers browse Mexican witchcraft products under the watchful eye of Santa Muerte. 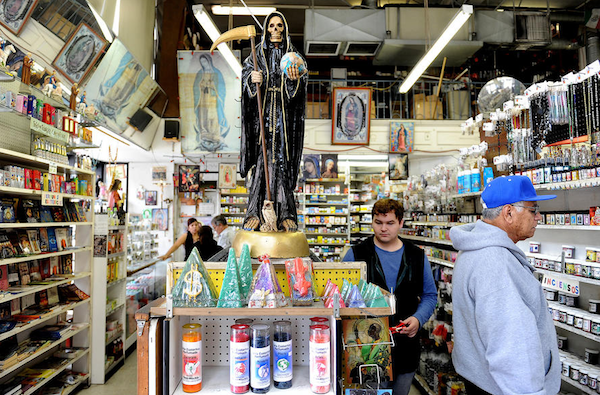 The more diverse LA Times of today apparently believes that all culturally based behavior is a good thing, even if criminal. One example: in December the Times celebrated scofflaw Hispanic peddlers: Los Angeles Ignores Illegal Street Vendors.

Today’s diversity parable promotes no crime, but has more to do with the primitive superstitions of Mexicans who buy magic candles to protect them from harm.

If California or America needs any immigrants at all (highly questionable because of workplace automation!), they should be educated persons, not third-world illiterates. Oh well!

The sign above a store window at 3rd and Broadway downtown looks ordinary enough: “Rx Pharmacy.” But it’s the signs below that make many passersby do a double take.

“We make amulets and candles,” a small white sign in the corner reads, below another offering limpias, or spiritual cleansings. Under the word “Botanica,” “Templo Santa Muerte” is stenciled in black letters. Rounding the corner toward the front of Farmacia Million Dollar, visitors are greeted by rows of statues, many of the folk saint. On the door, more signs advertise card readings: “English only Sunday appointment,” one says.

Inside, everyday drugstore items such as bath washes, bar soap, water and candles line the shelves. But the bath wash and soap are for protection and windfalls, and the water is colored and sealed with a paper label offering luck or safety.

The velas — candles — along the back shelves aren’t bought for their aroma; they’re lighted in the hope of bringing users what they desire, whether love or success.

What was once primarily a drugstore several years ago is now a refuge for people seeking solutions to everyday worries and problems — including the shop’s owner as he confronts a rapidly gentrifying neighborhood.

At the front counter, Lizeth Venegas prepares the candles with care. For the man buying the “Come to me” candle, she dusts it with powder and then tops it with some sprinkles. Once she’s finished, she wraps it back up and hands it to him. For the woman at the counter, Venegas lines up four candles with a reventador label to help get rid of negativity in her life.

There are hundreds of botánicas in Southern California, serving as centers of diverse practices — spiritual, medicinal and therapeutic.

They cater to a mainly Latino clientele, some of whom fear their religious family members will find out and disapprove that they’re turning to these shops for help.

“I think often the general default is that this is satanic, and for some in the Catholic Church this would be seen as false belief,” says Patrick Polk, curator of Latin American and Caribbean Popular Arts at UCLA’s Fowler Museum. “The reality is that it’s very easy to judge other people’s religions, and those judgments tend to be shaped by presumptions and stereotypes and misrepresentations.”

People will come into the shop and pray to Santa Muerte, because saints are believed to be conduits to the kingdom of heaven, Polk says. Santa Muerte is seen as the ultimate power, with death being something everyone will face, he adds.

“Because she’s so closely connected with everyday existential realities, she becomes someone people turn to as having a particularly unique power,” Polk says.

Some customers, mindful of accusations that botánicas are tied to witchcraft, tell friends they’re out running errands or even hide among the aisles and wait for a store clerk to help them away from the front door. Others pay in cash so that the charge from the pharmacy won’t show up on their credit card.

“It’s not witchcraft,” Venegas says. “I think good and bad exists, and if you do bad things it’s witchcraft…. Everything that’s done for good is good.”

Typically, Venegas, 47, prepares at least 25 candles a day, scratching in the name and birth date of the person affected and advising customers on the prayer they need to say.

Venegas has even prepared candles for the store’s owner, Richard Blitz, for health, success and to turn things around at the botánica. Blitz will light the candles and place them in the racks near the Santa Muerte altar, adding them to the rows already flickering.

One candle held a special petition from its user: “I would like good luck landing the role in ‘She’s Gotta Have It,’ a TV show being developed by Spike Lee.”

“We all light candles. We know the probability is not very successful, but it can work,” Blitz says. “You always hope for the long shot. Everybody does.”

But hope isn’t enough to bring in customers. Blitz says he’s seen a 25% to 30% drop in business over the last year alone, a drop he blames on a changing downtown. As the years have passed, Blitz said, he’s seen Latino businesses disappear as the number of Latinos who shop in the area slowly dwindles.

Blitz’s lease is up next year, and he’ll have to find a new location for his shop. Blitz believes a liquor store will take the space that’s been occupied for decades by the botánica.

“Gentrification is killing us,” Blitz says, glancing out the window. “I want to go where people like us. Downtown they don’t like us.”

The redeveloped area is a far cry from the 1970s and ’80s, when the Broadway corridor — between 2nd Street and Olympic — was anchored by an immigrant population that created its own thriving shopping district in abandoned movie theaters and office buildings.

Eric Avila, a professor of history, Chicano studies and urban planning at UCLA, has lived downtown for 10 years. He has taken note of some of the changes along Broadway, including at Grand Central Market, a minute’s walk from the pharmacy. Years ago, the market’s focus was on the Latino immigrant population that shopped downtown. With an influx of wealthier — and generally whiter — people, it’s starting to change.

“The botánica is part of a larger experience that’s happening to a lot of these kind of small mom-and-pop stores that are losing business,” Avila says.

Martha Cruz sits in one of the metal folding chairs in the back of the shop, waiting for her sister to finish a card reading. For three years the East L.A. resident has been coming to see one of the botánica’s card readers, Lupita Petersen, after Petersen helped her increase business at her beauty salon.

Petersen told Cruz that someone was trying to run her out of her business and advised her to buy candles and bath washes to help her get the salon back on track. Now it is doing well, and Cruz has brought her two sisters to visit Petersen.

“It gave me confidence,” says Cruz, 36. “She gives you confidence.”

At the readings, in a small back room with cards lining the side wall, Petersen has her customers silently think about various things while holding the cards and shuffling them. Afterward, the person cuts the deck into three and Petersen takes it from there — divining what’s happening, or will happen, in his life.

“The majority come for love,” Petersen says. “It’s missing from their lives.”

Petersen, originally from Mexico, has worked in the shop for 10 years. Over that time, she has cultivated regular clients who sometimes wait hours to see her.

Herminia Cruz, Martha’s sister, leaves the back room after nearly an hour, trading places with her sister on the folding chair. Petersen has recommended that she buy rechaza daños and destrancadera candles — those intended to repel harm and unlock a barrier to happiness — to help her stop someone at work who wants to take her job.

“I have kids and a house to support, so my job is necessary,” Herminia Cruz says. “I have to try and stop this before I lose my job.”

Arturo Molina greets the staff at the botánica by name. As he has done every week for about seven years, he lights a candle and offers a prayer to Santa Muerte and the Virgin Mary.

When explaining how the candles help, he points to his heart: “Inside here,” he says.

“I feel it if I’m not here,” says Molina, who lives in Hollywood but works downtown. “It’s a habit, you get used to it. Like tying your shoes every day.”