Los Angeles Times front page contained a sob-story extravaganza of refugee resettlement boosters cast as the virtuous heroes, while the opponents of importing sketchy African/Middle-Eastern Muslims etc. are evil haters. The main photo is of a smiling African boy in a welcoming church. 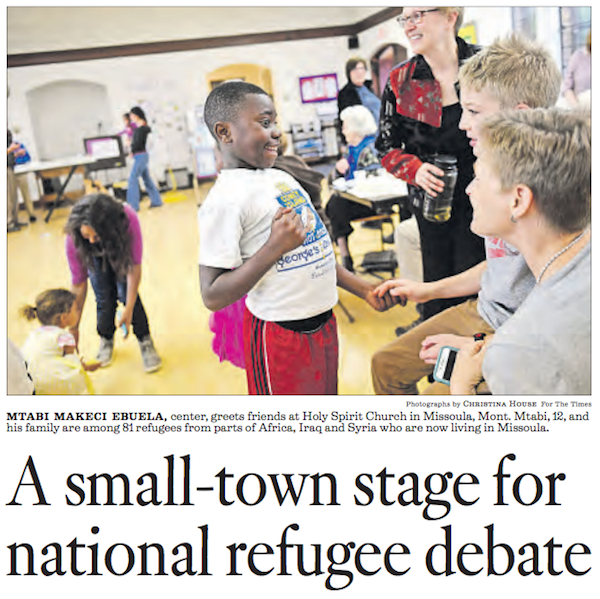 The Times makes David LeBleu the star of its little morality tale: the former New Yorker pushed for his adopted state to admit lots of refugees, particularly Syrians, which has not been a popular position in Montana. Most residents of the state don’t want their communities to be diversified with burqa-wearing, FGM-practicing, infidel-hating sharia supporters. But diversity infatuation is strong in LeBleu. 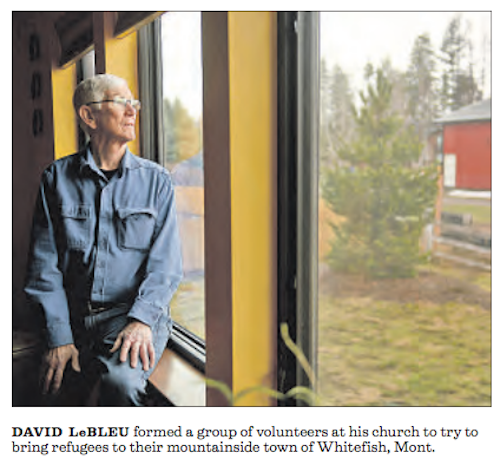 The situation is another case of liberal virtue exhibition. If the do-gooders really wanted to help, they would raise funds to assist the struggling people in their homelands, where the cash is twelve times more effective than importing foreigners, according to a 2015 study from the Center for Immigration Studies, The High Cost of Resettling Middle Eastern Refugees. But pursuing the most efficient policy to aid the most people wouldn’t bring the feel-good photo opportunities.

In addition, it’s not like the United States is overflowing with spare jobs. The millions of jobless citizens should get the first shot at employment, and they shouldn’t be standing in line behind foreigners. The March number of officially unemployed Americans was 7.2 million.

Finally, will no corner of America be allowed to remain free of government-imposed diversity? The people don’t want it, and for good reason: Islam has been the historic enemy of western civilization for more than a millennium. And today’s innocent child of immigrant parents may grow up to become tomorrow’s murder-seeking jihadist, as some already have, like the Orlando mass murderer Omar Mateen and the San Bernardino killer Syan Farook. Even the best government screening won’t stop the second-generation problem where the normal stress of growing up may cause a young person to accept jihad which offers a ready-made identity and a welcoming clubhouse.

Islam can act like a dormant disease where jihad may appear at a later date in a future generation. So why does the government continue the suicidal social policy of Muslim immigration? And why does Washington force it upon American communities that want to maintain their own culture without an enemy element being injected? No good can come of such foolishness.

How a Montana county became a stage for the national debate over refugees, by Jaweed Kaleem, Los Angeles Times, April 25, 2017

As images of dead Syrian children flashed across his television this month in Montana, David LeBleu prayed it would finally change minds.

“Could this be our chance?” he wondered.

LeBleu, 73, had been campaigning for a year to bring refugees to his tiny mountainside town of Whitefish. But in conservative Flathead County, he was making little headway.

Donald Trump had won the county with 65% of the vote in the presidential election and found widespread support there for his “America first” message and pledge to halt refugee resettlement nationwide. In that sense, the region wasn’t much different from a broad swath of the nation.

If the deaths of “beautiful babies” — as Trump had put it — in what the U.S. said was a poison gas attack couldn’t sway people, LeBleu figured nothing could.

“They don’t like newcomers here,” he said. “They want to just keep things the way they are, in the past.”

LeBleu himself is a newcomer, part of a wave of liberal-minded transplants drawn to Whitefish, population 6,357, for its natural beauty and slower pace of life. He moved from Long Island, N.Y., three years ago, following his daughter after retiring from teaching high school social studies and losing his wife to multiple sclerosis and cancer.

He was delighted that people would “talk to you on the street and ask how you were doing.” As a lifelong Christian, he was pleased to see churches everywhere.

But the faith that dominated northwest Montana was far more conservative than LeBleu had ever experienced.

To him, being a Presbyterian meant a life of public service and openness to other cultures. Back in Long Island, he sat on a refugee council at his church and once housed a Vietnamese refugee and her two sons. He joined churchgoers for a trip to refugee camps in the Middle East, and his church hosted a Coptic Christian priest from Egypt and a pastor from Syria.

But in Whitefish, the Presbyterian churches he visited were more interested in the Bible than the wider world and didn’t share his passion for women’s or gay rights.

LeBleu finally found a spiritual home alongside other liberal transplants at the Whitefish United Methodist Church. It was already working internationally to pay the salaries of Christian pastors in Angolan villages.

Its motto — “open hearts, open minds, open doors” — was prominently displayed on its website. To LeBleu, those were words to live by.

He saw an opportunity early last year after a photograph of a drowned Syrian boy went viral and a group of mothers in Missoula, a university town 130 miles down the interstate, were so moved that they launched an effort to take in refugees. Their plan to bring refugees to Montana for the first time in decades ignited a statewide debate and a string of demonstrations on both sides of the issue.

LeBleu’s response was to try to bring refugees to Whitefish.

He put out a call in church for volunteers. There were enough like-minded residents — the town had voted for Hillary Clinton — that he had no trouble finding support.

But it was a different story 17 miles south in the county seat of Kalispell, a blue-collar town of 20,000 known for its gun manufacturers and conservative churches.

Kalispell quickly became a hub of opposition to resettlement — and, on a rainy March morning last year, the site of a tense standoff.

LeBleu and about 70 pro-refugee activists, many from out of town, gathered in a park there with signs reading “Friendship not fear!” and “Stability, opportunity, peace for ALL.” Across the city’s main drag, a dozen or so Kalispell residents stood with their own placards warning of the problems they believed Muslims would bring: “Europe’s murder and rape epidemic is REAL, not ‘fear’” and “Kalispell NEEDS SHARIA LAW.”

Some of the men carried guns.

LeBleu was encouraged by the competing rallies. His side was bigger.

But letters to the local newspaper, the Daily Inter Lake, turned out to be a better indicator of public sentiment.

“Once those refugees are here, all we can do to protect ourselves is hope and pray they do not harbor sympathy for Islamic terror ideals. Beyond that, we are at their mercy,” one Kalispell resident wrote in a letter to the editor.

“Many of the refugees are being planted as representatives of Islamic terrorism. Europe is proof of this,” wrote another.

The Flathead County commissioners took sides last spring, sending a letter to the U.S. Department of State saying they could not “support the relocation of refugees without a legitimate vetting process and an analysis of refugee impacts to our local community.”

Kalispell seemed gripped by worry. In August, the newspaper reported that a woman called police to report that seven refugees appeared to be moving into an apartment building. They turned out to be workers.

It wasn’t until a few weeks later that the first refugees — a family of six from the Democratic Republic of Congo — arrived in Missoula. More families soon followed.

He figured the opposition would fade away as people saw that the refugees weren’t committing crimes, didn’t have diseases and didn’t want to impose Islamic law — and in fact were mostly Christian.

On the presidential campaign trail, Trump’s anti-immigrant rhetoric was intensifying — and riling up fear in Montana. Trump’s victory only invigorated opponents to refugee resettlement.

It was hard for LeBleu not to read some letters to the editor as personal attacks.

“How long do we have to tolerate leftists from other states coming here to bring ‘refugees’ from alien cultures to our cities? Cultures so far removed from our own that assimilation is impossible,” said one in December.

By the time Trump took office, LeBleu was on the verge of giving up.

His church committee stopped meeting and he started spending more time with his fiancee, a Montana native and a liberal like him. He saw more of his daughter, who runs the kitchen for a mountain guide company, and her two children.

But he still struggled to parse how people who called themselves Christians could oppose refugee resettlement.

At his church one Sunday in April, he listened to a sermon about judgment. “We sometimes criticize others unfairly,” the pastor said. “Only God, who is aware of all of the facts, is able to judge people righteously.”

LeBleu asked himself if he needed to try harder to understand the other side.

But he tried to avoid places like Liberty Fellowship, a church in Kalispell where that same day the pastor preached that Americans should focus on their own problems and not the rest of the world.

Some congregants said in interviews that they wanted to keep out refugees precisely to preserve Christian values.

“If enough people want to advance sharia law, it will happen,” Jerry O’Neil, a 73-year-old retired legislator, said after a Sunday service in April.

He insisted that Muslims would have so many children that soon they would outnumber Christians and take over Montana politics.

Another church member wondered if “forced multiculturalism” could breed violence.

Three months into the Trump presidency, 81 refugees from the Democratic Republic of Congo, Eritrea, Ethiopia, Iraq and Syria now live in Missoula.

“I have high ambitions,” said Joel Makeci Ebuela, a 33-year-old Congolese teacher who came with his wife and five children and recently started a part-time job as a greeter at Wal-Mart. His 12-year-old son joined a soccer league.

The family lives in a three-bedroom apartment and has taken advantage of clothing donations and English and driving classes offered through a charity. “I trust America because they help,” he said.

No refugees have come to Flathead County, where the debate rages on.

In Kalispell, ACT for America, a chapter of a national organization identified as a hate group by civil rights organizations, recently screened “Islam Rising,” a film by far-right Dutch politician Geert Wilders.

LeBleu does what he can, collecting clothing, diapers and other supplies and donating part of his Social Security and pension to help the refugees in Missoula. He said he may try to start up the church committee again with the hope of still bringing refugees to Whitefish.

He celebrated when the governor recently vetoed a state bill to ban Sharia law, saying it would add to a “nationwide surge in hate crimes.”

He was also encouraged after the gas attack in Syria, when Trump said that “no child of God should ever suffer such horror.” Maybe that would persuade people. But then he slipped back into a feeling of hopelessness.

“Does the president really care?” he said. “Does anybody?”

“People get to the point where they are numbed. Sadly, I think this is where we are. Nobody is going to change their mind.”