University of California Hid $175 Million in Secret Funds, According to Auditor

It’s a pretty big scandal in California that an audit published Tuesday showed the President of the University Janet Napolitano had accumulated a secret slush fund of $175 million. Napolitano’s office responded that no, the amount of UC cash hidden from regents and state officials is only $38 million.

What’s particularly shocking is how for years the university has increased the number of well-heeled foreign students because it wanted the higher tuition non-staters pay. An audit from a year ago found that UC lowered admissions standards for out-of-state students in order to get more of them — so the university has had a dismal history in regards to fairness toward young Californians who want college educations in their state. Now we learn there was plenty of spare cash that could have been spent on scholarships for state students.

At the prestigious UC Berkeley, shown above, 30 percent of the fall freshmen class of 2014 were not California residents. 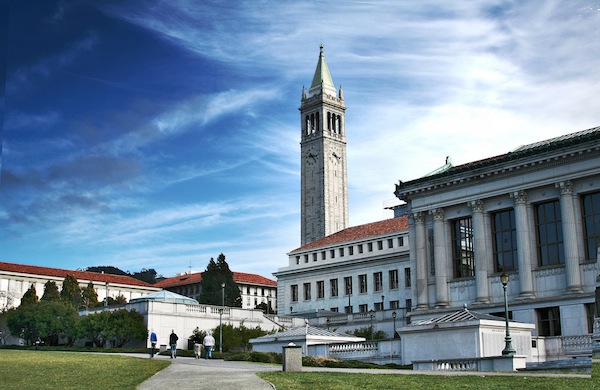 California parents have been angry and frustrated for years that fewer state kids were being admitted to the universities supported by tax dollars. The public outrage got so bad that in March, UC proposed a 20 percent cap on out-of-state students. 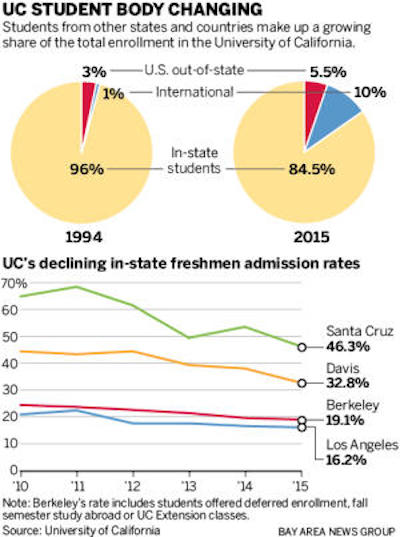 The policy amounts to young Californians being displaced from a reasonably priced college education that was once the promise of a wealthy state before it went haywire with immigration and liberal politics.

In contrast, California has been very generous to illegal alien college students and, in addition to in-state tuition, is now supplying financial aid to them at a current cost of $65 million. Last year, 20,000 illegal moochers applied for state financial aid.

Some of the secret funds were allocated for communications and brand management ($4.7 million), the president’s residence ($862,000), nonresident recruiting ($1.8 million) and an initiative that allows students at historically black colleges and universities to participate in UC summer research programs ($5.2 million).

In her earlier career, Janet Napolitano was the pro-amnesty governor of Arizona for two terms and the Secretary of Homeland Security. In 2009 she broke new ground in political correctness by referring to terror attacks as “man-caused disaster” during an interview with Der Spiegel.

A scathing state audit Tuesday accused University of California President Janet Napolitano’s office of hiding tens of millions of dollars in reserves — even from its own board of regents — and creating a secret spending plan, while also padding the salaries and benefits of her staff.

The eye-popping report comes as UC plans to hike tuition this fall and has already prompted one UC regent, Lt. Gov. Gavin Newsom, to publicly request a reversal of that increase.

State Auditor Elaine Howle found that UC’s central office had accumulated more than $175 million in reserves that it failed to disclose, including money it collects from campuses, for a series of systemwide initiatives from boosting the university’s carbon footprint to bolstering its cybersecurity.

“It’s like they had appropriations and kept the change, kept it in some slush account,” said Assemblyman Kevin McCarty, D-Sacramento, who requested the audit last year along with Assemblyman Phil Ting, D-San Francisco.

In another startling finding, the auditor accused Napolitano’s office of intercepting a confidential survey that the auditor sent to individual campuses about the quality and cost of services they received from the central office, causing campus officials to soften their responses.

For years, state lawmakers have been clashing with the university system over its opaque finances and escalating costs amid calls for belt-tightening by Gov. Jerry Brown. Tension between the state and the prestigious university system has mounted since the recession, when UC repeatedly hiked tuition to backfill state budget cuts and turned away record numbers of California high school seniors while admitting higher-paying, out-of-state and international students.

UC disputes some of the new findings. It says the size of the reserve is $38 million, not $175 million, and that the report “fundamentally and unfairly mischaracterizes UCOP’s budget processes and practices in a way that does not accurately capture our current operations nor our efforts and plans for continued improvement.”

The audit cited extensive problems with financial management at UC’s central office, including the following findings:

• Administrative spending shortly after Napolitano took control increased by roughly $80 million, or 28 percent, between 2012-13 and 2015-16, but the central office doesn’t have a reliable or consistent way to track such expenditures;

• It received significantly more money than it needed in each of the four years reviewed by the auditor, but asked for increases in future funding based on inflated budgets from previous years;

• It paid executives a total of $3.7 million in fiscal year 2015-16 — $700,000 more than other top-paid executives at comparable state agencies — and spent at least $21.6 million in employee benefits, including contributions to supplemental retirement savings plans.

“This report describes a breathtaking lack of transparency about how UC — which is a state institution — spends state money,” said David Snyder, executive director of the First Amendment Coalition, a Bay Area-based non-profit that fights for open and accountable government. “How much money UC actually has is of paramount importance, not just for students but for all Californians.”

Last week, the state auditor also dinged California State University for hiring new managers at a rapid rate and not being able to justify the number of new hires.

Brown did not comment on the findings, but state lawmakers — who will hold a hearing on the matter next Tuesday — were quick to react.

“The UC has constantly blamed us for not funding them enough,” Ting said, “while at the same time sitting on a pile of money they could use to solve their own problems.”

Newsom, who is running for governor, threw cold water on plans to raise tuition, calling it “outrageous and unjust to force tuition hikes on students while the UC hides secret funds.”

“The audit must serve as a wake-up call for the Board of Regents, as a catalyst for serious soul-searching within the UC’s administration, and demands a reboot of the relationship between the system and its governing body,” he said in a statement.

The regents in January passed a $336 increase in tuition and fees — the first hike in six years — a 2.7 percent rise. One student leader said he hoped the report, while troubling, doesn’t become an excuse for the Legislature to cut back on its support.

“I agree that this stuff needs to be above board,” said Ralph Washington, Jr., a UC Davis graduate student and president of the UC Student Association, “but I’m not sure if this is a justification that there’s plenty of money and the state Legislature doesn’t need to do more to help out students at the UC.”

The auditor also recommended a major change for a university system that largely operates independently of the Legislature: Instead, lawmakers would directly allocate the budget for the Office of the President’s operations. The report also suggests that the UC Board of Regents hire an outside firm to help it monitor a three-year “corrective action plan.”

In a six-page response, Napolitano wrote that the audit report erroneously claimed that her office failed to publicly disclose “tens of millions in surplus funds.” She also disputed the finding that UCOP’s budgeting practices were misleading.

“In fact, UCOP’s budget and financial approaches reflect strategic, deliberate and transparent spending and investment in UC and state priorities,’’ she wrote.

The auditor said Napolitano’s office hasn’t been able to “provide evidence that refuted our conclusion” that the office didn’t publicly disclose the tens of millions in surplus funds.

In a separate letter to the auditor, Board of Regents Chairwoman Monica Lozano and Regent Charlene Zettel said they agreed with most of the report’s recommendations, apart from those that would undermine UC’s autonomy. They stressed the report did not diminish their confidence in the Napolitano’s leadership.

One student leader at UC Berkeley said he was disturbed by the finding that Napolitano’s office interfered in a survey of campuses. Campus statements that were initially critical of the Office of the President were revised, the auditor said, and quality ratings shifted to be more positive. In response, the president’s office said it facilitated “coordination processes” to “get the auditors accurate information.”

“That’s disappointing on a lot of levels,” said André Luu, external affairs vice president for UC Berkeley’s student government. “At the end of the day there’s a reason students are consistently disappointed in the decisions that UCOP makes.”