Monday’s front page of the Los Angeles Times had a headline that was ever-so-slightly critical of the former Catholic Cardinal who presided over the local diocese: “INTO THE LIGHT, As the clergy abuse scandal unfolds, Roger Mahony’s moral authority — and his legacy — erodes.” 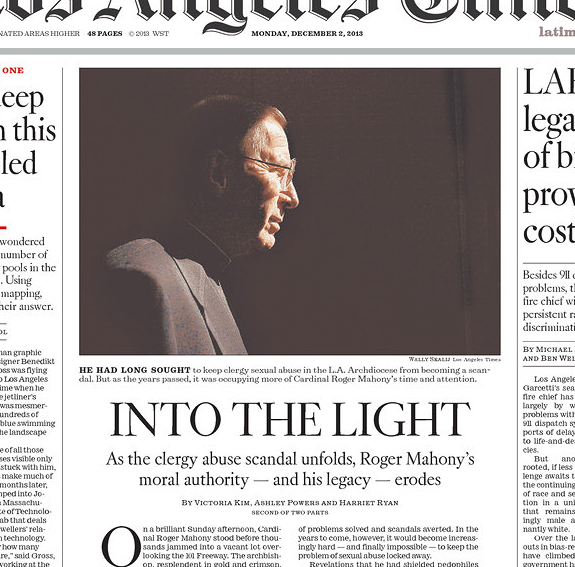 It was part of a feature article that was unduly kind to a man who protected pedophile priests for decades and caused immeasurable psychological damage to many children. The two-day article was a careful mixture of analysis that investigated Mahony’s agenda of promoting illegal immigration and expanding his own political power, and how that scheme was somewhat thwarted by his criminal protection racket of keeping pedophile priests safe from authorities.

One measure of Mahony’s leadership: in 2007, Mahony wrote a $600 million check to settle sex abuse claims, the largest amount ever in the United States for such crimes.

When Detective Gary Lyons recalled Mahony and his lawyers representing pedophile priests for the article, he characterized them as criminals: “They lied as bad as any thug or ex-con I’ve ever come across on the street. They were more interested in saving the reputation of the church than helping us find these young victims.”

Pundit Tucker Carlson recognized the cardinal’s failure of integrity in 2006, observing, “And yet despite all this, Mahony still has the gall to lecture the rest of us about our moral inferiority because we don’t support illegal immigration. At this point, Roger Mahony is not in a position to tell anybody anything. He’s lucky he’s not in jail.”

Yet Mahony continues to preach about the wonders of illegal immigration on the blog that he writes from a deluxe diocese apartment rather than a cell. As I reported in More Nails in the Moral Coffin of Cardinal Mahony, he used that blog to compare supporters of Arizona’s immigration enforcement law to Nazis.

The LA Times’ criticism was not exactly timely, since Mahony retired from his position in February 2011 and was replaced by a genuine Mexican. It may seem a little odd that an investigation of a powerful local figure would come so late, but the report follows the release of thousands of pages of documents related to Mahony’s extra-legal machinations.

The original story on latimes.com has interesting graphics like Mahony praying and an expanding chart of nearly 50 priests accused of abusing children over his tenure. The illegal alien issue is sprinkled throughout.

From the start of his tenure as the leader of L.A.’s Catholics, Roger Mahony had ambitious plans for the archdiocese. But clergy molestation claims were vying for his attention.

A year after arriving in Los Angeles, the youngest archbishop in the U.S. Catholic Church had a schedule and an agenda befitting a presidential candidate.

Roger Mahony raced around the city in a chauffeured sedan, exhorting labor leaders to support immigrant rights and rallying hundreds against a proposed prison in Boyle Heights.

Reporters took notes and the influential took heed. The mayor, the governor, business executives and millionaires recognized a rising star and sought his company.

Among the thousands of papers that crossed his desk in September 1986 was a handwritten letter.

“During priests’ retreat … you provided us with an invitation to talk to you about a shadow that some of us might have,” Father Michael Baker wrote. “I would like to take you up on that invitation.”

The note would come to define Mahony’s legacy more than any public stance he took or powerful friend he made.

In the child sex abuse scandal that has shaken the Catholic Church, Mahony is a singular figure.

He became the leader of America’s largest archdiocese at the very moment the church was being forced to confront clergy molestation. Because he was just 49 when he took office, he was in power for the entire arc of the abuse crisis. Long after peers had retired or died, Mahony was around to face the public’s wrath. Because of the unique way abuse lawsuits played out in California, his files on molesters became public while in most other corners of the church, they remain under lock and key.

The archdiocese’s confidential personnel files, released this year as part of a massive settlement of civil lawsuits, provide the most detailed accounting yet of how clergy abuse was handled in a U.S. diocese. Along with sworn testimony by Mahony and his advisors and interviews with church officials, victims’ families and others, the nearly 23,000 pages maintained by the archdiocese and various religious orders suggest a man who was troubled over abuse but more worried about scandal — and how it might derail the agenda he had for himself and his church.

When Roger Mahony was tapped in 1985 to lead Los Angeles’ 3 million Catholics, he was bishop of the sleepy Stockton diocese where the faithful numbered just 135,000.

Some might have been nervous about taking on such a visible, high-pressure role, but not Mahony. The North Hollywood native enjoyed the spotlight, whether it was marching with Cesar Chavez in the 1970s or jumping into the nuclear arms debate from the unlikely perch of Stockton. L.A. offered Mahony a national platform.

He began changing the way the archdiocese was run. He stocked the chancery with computers and laser printers and hired women and minorities for key positions.

He seemed almost temperamentally unable to see a problem and not do something. When a cathedral fire alarm stopped working, Mahony found a screwdriver and rewired it. When the clock was blinking the wrong time in an aide’s car, he quickly reset it. On vacation at his mountain cabin in the Sierra, he never let friends wash the dishes — he could do it faster and better.

When it came to the big issues of the day, he wanted his church to move just as nimbly.

He set out to redefine its relationship with secular L.A., inserting himself into debates on an array of issues. Whether it was teen pregnancy or Soviet aggression, if Reagan-era America was talking about it, Mahony was too.

Latino concerns had been important to him since the days when he worked on his family’s chicken ranch in North Hollywood, side by side with Mexicans in the country illegally. Within months of taking office in L.A., he had rolled out his “Latino plan” — a strategy for better serving the archdiocese’s 2 million Latino Catholics. He quickly became a prominent proponent of an immigration bill that would grant amnesty to millions.