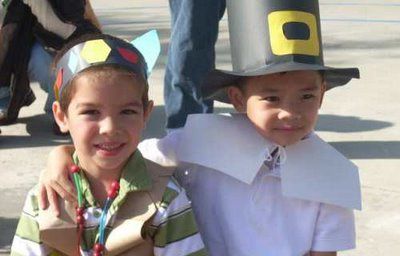 The War On Christmas is already in progress, so I need to get this last War On Thanksgiving  item out of the way,

This is a quote from Diana West’s American Betrayal: The Secret Assault on Our Nation's Character. I’ve added a couple of links, and her footnote, in the book itself, referenced her own blog item Pieces, Shards, Dust...Revolt?, DianaWest.net, November 25, 2008, where you can go for more links.

It indicates the craziness and Year Zero mentality of the War on the West. In the run-up to Thanksgiving 2008, a small-town elementary school in Southern California received a letter. It was from a parent whose daughter was enrolled in the school’s kindergarten. This parent, later described as a university English professor “specializing in Native American literature,” wrote in to say she had just learned that, according to local custom some forty years old, the school’s kindergartners would be joining kindergartners from another local school for a Thanksgiving feast, with one class dressed up as Indians and the other class dressed up as Pilgrims.

Costuming the children this way was “demeaning,” she wrote, adding, “I’m sure you can appreciate the inappropriateness of asking children to dress up like slaves (and kind slave masters), or Jews (and friendly Nazis), or members of any other racial minority group who has struggled in our nation’s history.” The first Thanksgiving thus equated with mealtime at Buchenwald served up by Simon Legree, the parent demanded the schools abolish the celebration, which meant up to and including the the macaroni Indian necklaces and the black paper Pilgrim hats.

Before considering the official response of the schools, it’s worth recalling that in the case of the Plymouth Colony harvest feast of 1621 that Americans have commemorated as a day of national thanksgiving since the nineteenth century, the “minority group” who “struggled” was in fact the group of Pilgrims and other passengers who had made the arduous Atlantic crossing in 1620. Half of these English Separatists had died since setting sail from Plymouth, England, mostly during that first Massachusetts winter, and it was largely due to the aid of two English-speaking Indians, Squanto and Samoset, that the 53 (out of 102) who survived were able to bring in a good harvest the following fall. It was then, according to a contemporaneous account by Edward Winslow, “amongst other Recreations, we exercised our Armes, many of the Indians coming amongst us, and amongst the rest their greatest king Massasoyt, with some ninetie men, whom for three dayes we entertained and feasted.”  Here lies the basis of our foundational act of thanksgiving to God and comity among men—not to mention bona fide cultural duality, if not technical diversity.

But of course, the schools folded like a cheap suit.

War On ThanksgivingWar On Christmas
<< Previous
Next >>
LATEST