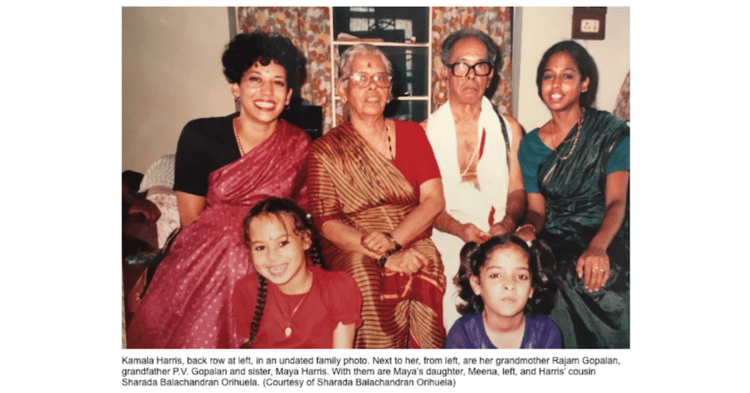 Sunday’s Los Angeles Times presented a front-page article on presidential candidate Kamala Harris, who is not close to being a front-runner, but she is a diverse Californian who favors open borders, and that qualifies her for attention from the paper.

Much of the media coverage of Harris’ background has focused on the black half coming from her Jamaican father — like when PBS’ Gwen Ifill called her the “female Barack Obama” — but the Times considers her Indian background from mother Shyamala and family, and those roots go deep. The reader learns that as a girl, Kamala had “extended visits to India” where she grew close to her aunts and uncles. Her grandfather P.V. Gopalan was a civil servant who influenced her choice of a career in public service.

Citizens of India take great interest in their immigrants to America and don’t want them to forget their roots in the Subcontinent. One example was the half-Indian, Ohio-born astronaut Sunita Lyn Williams whose 2006 flight into space inspired rapturous attention among countless Indians who were filled with pride at her success.

Similarly, after a Harris stump speech filled with praise for her Indian values, an audience member asked whether she would wear a sari at her inauguration. Harris sidestepped by saying, “Let’s first win.”

The Times article shows a young Harris wearing a sari, so she is familiar with the garment. Are we diverse enough yet? 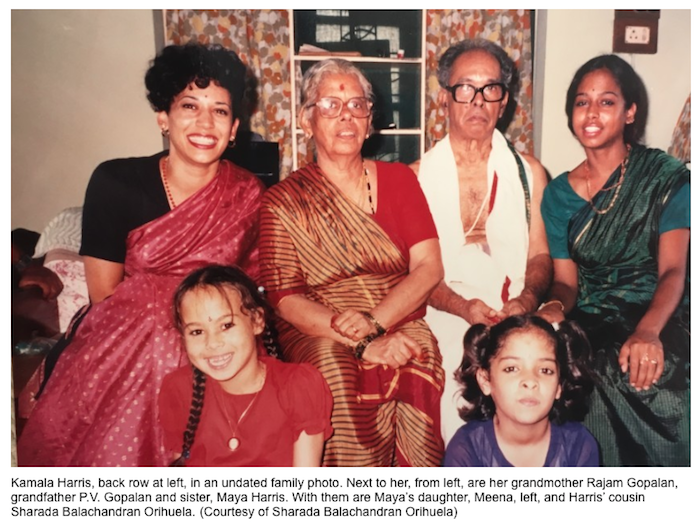 NEW DELHI —  For a girl from Berkeley, about 5 years old, the setting must have been intoxicating: a bungalow surrounded by greenery in a newly independent African capital, where children ran outside to wave at the president’s car as he drove past.

This was where a young Kamala Harris spent time in the late 1960s, at a house in Lusaka, Zambia, that belonged to her maternal grandfather, an Indian civil servant on assignment in an era of postcolonial ferment.

The Indian government had dispatched P.V. Gopalan to help Zambia manage an influx of refugees from Rhodesia — the former name of Zimbabwe — which had just declared independence from Britain. It was the capstone of a four-decade career that began when Gopalan joined government service fresh out of college in the 1930s, in the final years of British rule in India.

It was also the start of a relationship that would define Harris’ life. Until his death in 1998, Gopalan remained from thousands of miles away a pen pal and guiding influence — accomplished, civic-minded, doting, playful — who helped kindle Harris’ interest in public service.

“My grandfather was really one of my favorite people in my world,” Harris, California’s junior U.S. senator, said in a recent interview.

As she campaigns for the Democratic presidential nomination, Harris often invokes her late mother, Shyamala, a diminutive and dauntless breast cancer researcher who taught Kamala and her younger sister, Maya, to strive for excellence and lift others up. (Continues)