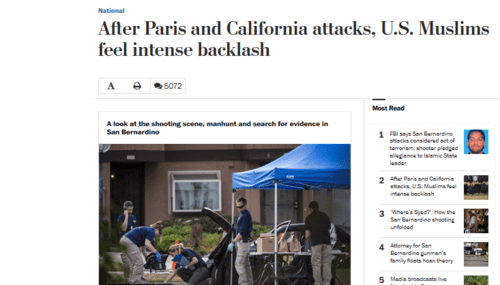 The Washington Post's teaser for its backlash story:

‘I am terrified’: After attacks in Paris and California, U.S. Muslims feel intense backlash

Many Muslims said fear of Islam is being fueled by the heated rhetoric of Republican presidential candidates, particularly Donald Trump, who has proposed that Muslims register with the government.

Pew studies show that since the 9/11 attacks, Americans have become far more likely to think that Islam encourages violence more than other religions might. A Pew survey in March 2002 found that 25 percent of Americans held that view, and the number reached 50 percent by September 2014.

Now why would anyone think that?

Then we get this claim, for which the Post offers no data:

Anti-Muslim violence in the United States has jumped since the Paris attacks, including gunfire and vandalism targeting mosques and assaults against individual Muslims.

One recent evening, Haneen Jasim, 22, a University of Cincinnati pre-med student who wears the hijab, said she had just left a Starbucks where she was studying for an exam when a man approaching in a car began honking his horn.

With his window rolled down, he began shouting insults at her and called her a terrorist.

“He was yelling, ‘Paris!’ and told me to go back to my country,” Jasim said in an interview.

As he yelled, she said, he drove toward her, “almost running me over.” Three people pulled her to safety on the sidewalk, she said.

The encounter left her "scared" and "terrified," but alas, she sees the good side of it all.

“I am terrified. My friends are scared. My family is scared. I’m scared for other people, but this is an opportunity to show to people what Islam is, instead of what the media or ISIS shows.”

We know what it is, Haneen. We know.