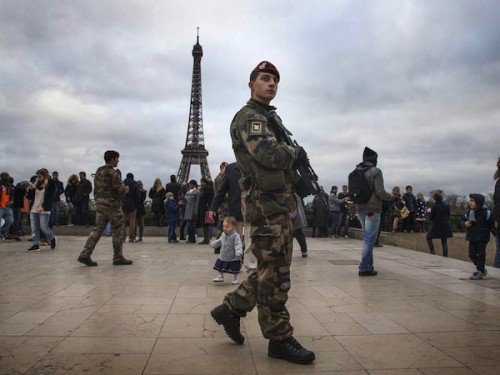 France Mounts More Than 2000 Raids in Response to Paris Jihad

French police have been busy over the last couple of weeks since the murderous jihad attack against Paris on November 13 that killed 130 people.

Not only were 2,235 raids carried out, police arrested 232 persons and seized 334 guns, including 34 of a military grade. In addition, a few extremist mosques were closed.

This is what happens when a country allows too many Islamics to reside within, and France has the dubious honor of having the highest proportion of Muslim residents in western Europe — 7.5 percent. In November, Pew Research published a fact sheet about the dismal demographics, 5 facts about the Muslim population in Europe that puts France’s Islamic residents at 4.7 million.

Police shut a mosque east of Paris and arrested the owner of a revolver found in related raids on Wednesday as part of a crackdown called after the Nov. 13 attacks on the capital, Interior Minister Bernard Cazeneuve said.

He told journalists authorities had already closed two mosques last week – the first time France has taken such action against places of worship suspected of nurturing what he called “Islamist radicalization”. He later also revealed to lawmakers in parliament the closure of a fourth mosque in the riviera city of Nice.

Security officers found jihadist documents at the mosque where Wednesday’s raids took place and at related premises in Lagny-sur-Marne, placed a total of nine people under house arrest and banned another 22 from leaving the country, Cazeneuve said.

France, which declared a state of emergency after the Islamist attacks on Paris, has so far raided 2,235 homes and buildings, taken 232 people into custody and confiscated 334 weapons, 34 of then war-grade, Cazeneuve told reporters.

“In 15 days we have seized one-third of the quantity of war-grade weapons that are normally seized in a year,” Cazeneuve said.

The other two mosques closed last week were in Gennevilliers, northwest of Paris, and in the southeastern city of Lyon, he added.