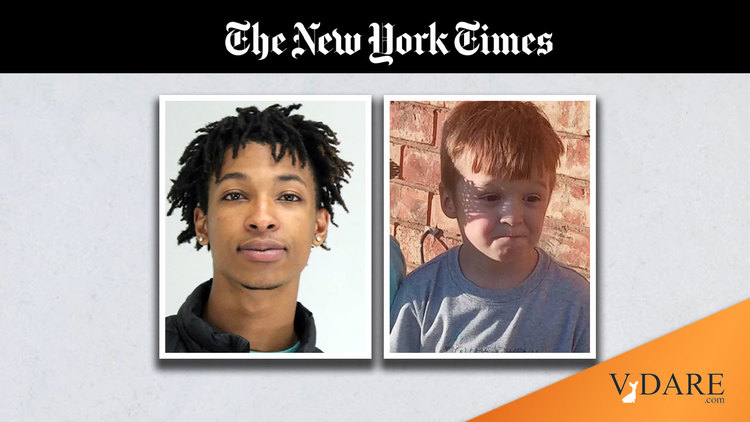 The murder of a 4-year old white boy named Cash Gernon in Texas has been making international news, in the British Daily Mail, Independent, and Sun.

Update: the person who tweeted a link to the Sun story, with the words:

A 4-year-old Texas white boy was snatched from his bed over the weekend by Darriynn Brown, an 18-year-old black man, who brutally stabbed the child and left his lifeless body out in the street.

has been forced to protect his Tweets. See this version, instead:

It's in People Magazine, and it's even made the news in Poland.

It has not, however, reached the offices of the New York Times. A search for Cash Gernon's name comes up empty.

This was also the case in the murders of Tori Rose Smith, Cannon Hinnant, and Paul and Lidia Marino, as I wrote in January:

The New York Time's motto, dating back to 1896, is "All The News That's Fit To Print." One of the earliest articles I read on VDARE.com , before I started working here myself, was Scott McConnell's Unfit To Print, January 10, 2000, about the Wichita Massacre, in which three white men and two white women were abducted, abused, and then shot by two black men, killing four of them and wounding one. The details of that didn't appear in the NYT until 15 years later, when Justices Alito and Scalia mentioned them in the killers' death penalty case.

Murders of whites by blacks are very rarely "national news" as far as the New York Times news section is concerned.

What is national news: every time anyone says "no" to someone black.