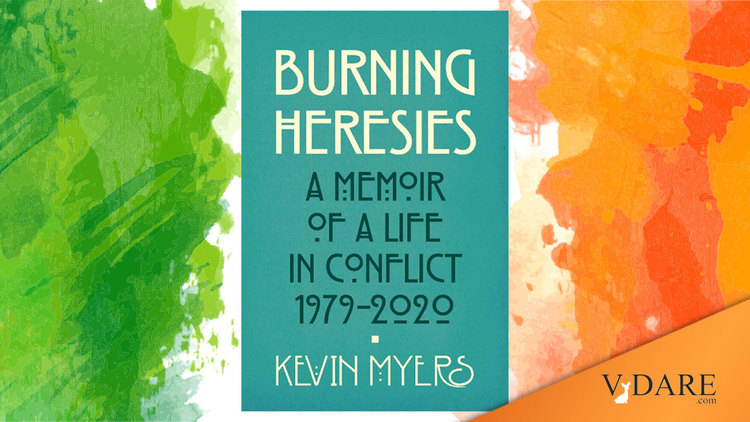 On Twitter, someone I don't know has some screenshots of Irishman Kevin Myers' memoirs. 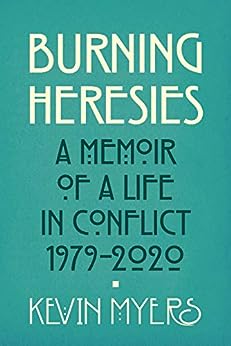 While his memoir of the Troubles in Northern Ireland, Watching The Door, covers a conflict entirely between two groups of white people, Burning Heresies: A Memoir of a Life in Conflict, 1979-2020 mentions a new factor in Ireland: race and anti-racism.

This was the Führer’s last poisoned gift to Europe: a taboo on discussing the role of kinship and identity within society which might one day spell the death knell for an entire civilisation.

This is almost exactly what VDARE.com editor Peter Brimelow said in the Preface to Alien Nation in 1995:

There is a sense in which current immigration policy is Adolf Hitler's posthumous revenge on America. The U.S. political elite emerged from the war passionately concerned to cleanse itself from all taints of racism or xenophobia. Eventually, it enacted the epochal Immigration Act (technically, the Immigration and Nationality Act Amendments) of 1965.

And this, quite accidentally, triggered a renewed mass immigration, so huge and so systematically different from anything that had gone before as to transform—and ultimately, perhaps, even to destroy—the one unquestioned victor of World War II: the American nation, as it had evolved by the middle of the 20th century.

Here's how it played out in Ireland, according to Myers:

The dogmas of equality seemed even to govern health policy, for across the EU from the 1980s onwards we were assured that AIDS threatened us all equally. This state-backed lie caused one reader to write to the Daily Telegraph:  “I am a maiden lady in her early eighties. I have just recently received a public health warning to desist from anal sex, advice which I do not think my personal habits have yet justified.” Newspapers were now in the business of promoting the fictions of equality rather than discussing the uncomfortable realities of epidemiology. Thus the clarion headlines that a government report had revealed a dramatic increase in heterosexual AIDS in Ireland.

Only by going through the report’s fine print did I find that the increase was almost entirely confined to African immigrants. When I asked the press officer responsible why this had not been pointed out in the official press release, she replied, “Are you mad?”

This conscious process of actually directing news reports towards a particular outcome was vital to the [Northern Irish 1998] peace process, which was predicated upon ignoring inconvenient truths.

And we're back in the problems of white people.

Myers' idea that this fear of being called racist might "one day spell the death knell"  of an entire civilization is exactly the same the point Brimelow was making.

Destroying your civilization to prove you're not Hitler is not a good idea.