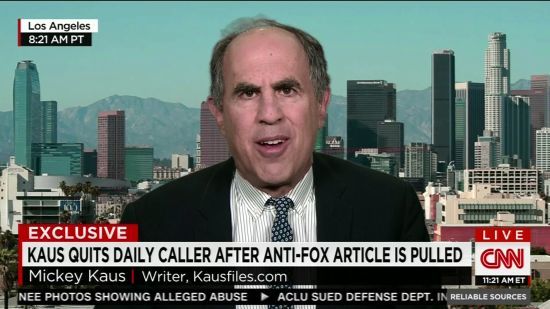 Kaus Video On Why Conservatives Fear To Criticize Fox News

This is video of Mickey Kaus being interviewed on TV about why conservatives are afraid to criticize Fox News.

It's on CNN, not Fox, of course, and the video was posted on left-wing site "Crooks And Liars", which writes

Former Daily Caller writer, Mickey Kaus joined CNN's Brian Stelter on Reliable Sources to explain in some detail why he quit Carlson's website and why conservatives are afraid to ever criticize Fox News.

KAUS: Well, that's right. I had no problems with them before. But I posted this piece on the web early in the morning Monday morning, very early. I stayed up all night doing it.

And I went to sleep and I got up and it disappeared. There's a note from Tucker saying, "Can't trash FOX on the site. Sorry, I work there." So, I wrote back saying, "Is that really the rule? Because if it is, I have to quit."

All conservatives are in fear of being caught criticizing Roger Ailes baby because they will be shown the door. That's called a monopoly boys and girls and it's a powerful tool to wield against your supposed allies. It has a way of keeping the troops in line at all times.

Right, and it's only a "monopoly" because of the monolithic 99% dominance of liberals on CBS, NBC, ABC, and the major print media, in a country where, every four years, about half the voters vote  for the Republican, and a supermajority of Americans are opposed to amnesty.