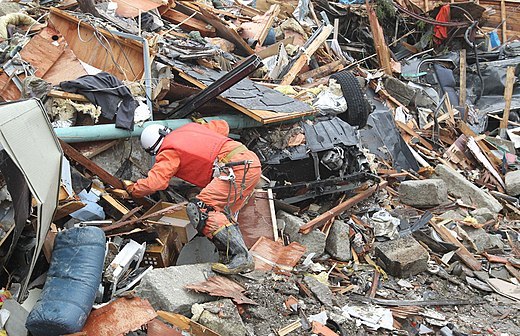 In response to the Japanese earthquake and tsunami, CNN posted:

The layer of human turmoil - looting and scuffles for food or services - that often comes in the wake of disaster seems noticeably absent in Japan.

"Looting simply does not take place in Japan. I'm not even sure if there's a word for it that is as clear in its implications as when we hear ”looting,'" said Gregory Pflugfelder, director of the Donald Keene Center of Japanese Culture at Columbia University.

Japanese have "a sense of being first and foremost responsible to the community," he said.

To Merry White, an anthropology professor at Boston University who studies Japanese culture , the real question is why looting and disorder exist in American society. She attributes it largely to social alienation and class gaps.

"There IS some alienation and indeed some class gaps in Japan too butÂ violence, and taking what belongs to others, are simply not culturally approved or supported," White said in an e-mail. ...

"Such social order and discipline are so enforced in ordinary times that I think it's very easy for Japanese to kind of continue in the manner that they're accustomed to, even under an emergency." The communitarian spirit at the foundation of Japanese culture seems to function even more efficiently under the stress of disaster, he said. The natural American inclination is to operate independently. "So you do everything you can to protect your own interests with the understanding that, in a rather free-market way, everybody else is going to do the same. And that order will come out of this sort of invisible hand."

But, having covered the 1995 Kobe earthquake (which killed more than 6,000 people and left 300,000 homeless) when I lived in Japan as Tokyo bureau chief for The New York Times, I have to add: Watch Japan in the coming days and weeks, and I bet we can also learn some lessons. ...

Japan's orderliness and civility often impressed me during my years living in Japan, but never more so than after the Kobe quake. Pretty much the entire port of Kobe was destroyed, with shop windows broken all across the city. I looked all over for a case of looting, or violent jostling over rescue supplies. Finally, I was delighted to find a store owner who told me that he'd been robbed by two men. Somewhat melodramatically, I asked him something like: And were you surprised that fellow Japanese would take advantage of a natural disaster and turn to crime? He looked surprised and responded, as I recall: Who said anything about Japanese. They were foreigners.

Japan has an underclass, the burakumin, and also treats ethnic Koreans with disdain. But compared to other countries, Japan has little extreme poverty and a greater sense of common purpose. The middle class is unusually broad, and corporate tycoons traditionally were embarrassed to be seen as being paid too much. That sense of common purpose is part of the country's social fabric, and it is especially visible after a natural disaster or crisis.