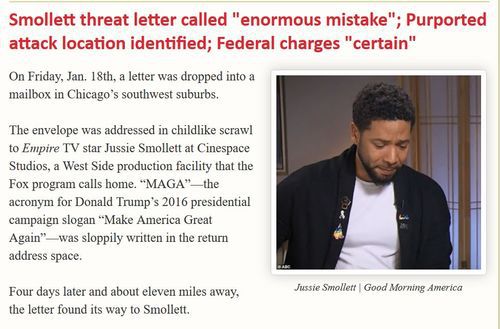 Jussie Smollett May Be In Big Trouble Over Letter

The threatening letter to Jussie Smollett might be more in the news soon.

You might imagine that grinding up some Tylenol to look like anthrax and mailing it to yourself in a hate hoax would be an amusing publicity stunt. And what’s the worst that can happen? It’s not like there’s a law against that, right?

Well, actually, there is a federal law against “terroristic hoax.” And it’s a felony.

CWB Chicago is a gay anti-crime website that originated to expose the crime problem on the upscale Northside, in Wrigleyville, where the Cubs play, and Boystown, the old gay neighborhood. It offers nicely written, rather rambling coverage of crime issues in Chicago, like a moderate gay yuppie Second City Cop.

… Meanwhile, the FBI and the U.S. Postal Inspection Service has been quietly working on the origins of Smollett’s letter for nearly a month. Giving it far more “attention” than he knew.

Late Monday, CWBChicago received confirmation that the letter case has been before a federal grand jury and multiple subpoenas have been generated over the course of the investigation.

In a conversation on Feb. 8th, before police met with brothers Ola and Abel Osundairo, a leading source within the Smollett attack investigation called the hate crime a “false flag” and said “There is a direct line between (the letter) and (the purported attack).” In the same conversation, the source hinted at what was to come: “This is not a whodunit. It’s a how-many-people-dunit.”

Federal charges against whoever mailed the letter were, they said, “certain.” Whoever sent the letter, we were told, “made an enormous mistake.”

A law firm partner who asked not to be identified by name spoke with us about the federal problems ahead for whoever mailed the letter: “If they have Smollett on the letter, he’ll be facing ’terroristic hoax’ charges, a felony. There may be federal obstruction charges as well.”

All in all, the federal legal options are numerous: “If they want to bury him, they can.”