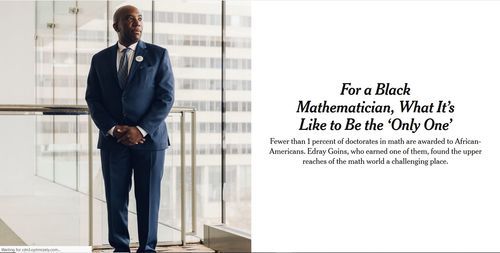 Amy Harmon is back in the New York Times:

For a Black Mathematician, What It’s Like to Be the ‘Only One’

Fewer than 1 percent of doctorates in math are awarded to African-Americans. Edray Goins, who earned one of them, found the upper reaches of the math world a challenging place.

Edray Goins is one of about a dozen black mathematicians among nearly 2,000 tenured faculty members in the nation’s top 50 math departments.

BALTIMORE — It was not an overt incident of racism that prompted Edray Goins, an African-American mathematician in the prime of his career, to abandon his tenured position on the faculty of a major research university last year.

The hostilities he perceived were subtle, the signs of disrespect unspoken.

There was the time he was brushed aside by the leaders of his field when he approached with a math question at a conference. There were the reports from students in his department at Purdue University that a white professor had warned them not to work with him.

One of only perhaps a dozen black mathematicians among nearly 2,000 tenured faculty members in the nation’s top 50 math departments, Dr. Goins frequently asked himself whether he was right to factor race into the challenges he faced.

That question from a senior colleague on his area of expertise, directed to someone else? His department’s disinclination to nominate him to the committee that controls hiring? The presumption, by a famous visiting scholar, that he was another professor’s student?

What about the chorus of chortling that erupted at a lunch with white and Asian colleagues when, in response to his suggestion that they invite underrepresented minorities as seminar speakers, one feigned confusion and asked if Australians qualified.

“I can give you instance after instance,” Dr. Goins, 46, said as he navigated the annual meeting of the nation’s mathematicians in Baltimore last month. “But even for myself I question, ‘Did it really happen that way, or am I blowing it out of proportion? Is this really about race?’”

The ‘leaky pipeline’
Black Americans receive about 7 percent of the doctoral degrees awarded each year across all disciplines, but they have received just 1 percent of those granted over the last decade in mathematics. Like many who see in that disparity a large pool of untapped talent, Dr. Goins has long been preoccupied with fixing what is known as the “leaky pipeline.”

… The 10 black students in his incoming class were the largest group Caltech had ever enrolled, he learned when he wrote a paper on the little-known history of being black at Caltech for a summer research project. Only three of the others graduated with him four years later.

I’m not a big believer in Thomas Sowell’s Mismatch Theory, but Caltech is an obvious case.

… Last fall, in a move almost unheard-of in the academic ecosystem, he traded his full professor post at Purdue, where federal resources are directed at tackling science’s unsolved problems and training a new generation of Ph.D.’s, for a full professorship at Pomona, a liberal arts college outside Los Angeles that prioritizes undergraduate teaching.

That’s kind of like a popular but not intensely talented golf pro giving up the struggle to win on the PGA Tour to become the teaching pro at Riviera.

“Edray,” he recalled one colleague telling him, “you are throwing your career away.”

In an essay that has been widely shared over the last year, Dr. Goins sought to explain himself. He extolled the virtues of teaching undergraduates and vowed to continue his research. But he also gave voice to a lament about the loneliness of being black in a profession marked by extraordinary racial imbalance.

“I am an African-American male,” Dr. Goins wrote in a blog published by the American Mathematical Society. “I have been the only one in most of the universities I’ve been to — the only student or faculty in the mathematics department.”

“To say that I feel isolated,” he continued, “is an understatement.”

Solution to my unhappiness: spend zillions to trick more blacks into my same unfulfilling career.

Experiences similar to Dr. Goins’s are reflected in recent studies by academic institutions on attrition among underrepresented minorities and women across many disciplines. Interviews with departing faculty of color indicated that “improving the climate” would be key to retaining them, according to a 2016 University of Michigan report. Officials at Columbia, which has spent over $85 million since 2005 to increase faculty diversity, with disappointing results, suggested last fall that progress would hinge partly on majority-group faculty members adjusting their personal behavior.

“In most cases, faculty are not consciously or purposely trying to make colleagues feel unwelcome or excluded,” said Maya Tolstoy, dean of Columbia’s arts and science faculty. “But it happens.”

Those white and Asian racist mathematicians microaggress by talking about complicated math stuff all the time.

And at the recent math meeting, where Dr. Goins delivered a keynote address titled “A Dream Deferred: 50 Years of Blacks in Mathematics,” his presence kindled conversations about racial slights in the math world. …

Hiring committees that reflect the mostly white and Asian makeup of most math departments say they are compelled to “choose the ‘best,’” said Ryan Hynd, a black mathematician at the University of Pennsylvania, “even though there’s no guideline about what ‘best’ is.”

I mean, math is just a socially constructed exercise of power and interpersonal dominance with no objective underlying reality. For example, the one time I was at a math conference, some math professor wrote some gibberish on the whiteboard. I raised my hand and said, “Yeah, well, you know, that’s just, like, your opinion, man,” totally pwning him.

… For the representation of African-Americans in math departments to reach parity with their 13-percent share of the country’s adult population, their ranks would have to increase more than tenfold. (The number of women, also notoriously low among math faculty, would need to triple.)

Mr. President, we must not allow a mathshaft gap!

Dr. Goins’s colleagues at Purdue said his receipt of tenure and subsequent promotion to full professor signaled the university’s willingness to overlook a sparse research portfolio in light of his extraordinary work with undergraduates, as well as the summer programs he organized for minority students.

“While these areas are not necessarily ‘traditional’ markers for excellence at major research universities, they were valued,” Greg Buzzard, the head of Purdue’s math department, who is white, said in a statement.

But Dr. Goins said he was looking for something else.

Amy Harmon is a national correspondent covering the intersection of science and society. She has won two Pulitzer Prizes, one for her series “The DNA Age,” and another as part of a team for the series “How Race Is Lived in America.” @amy_harmon • Facebook

Update: By the way, Professor Goins is from South-Central Los Angeles, so there’s nothing too remarkable about him preferring an opportunity to live, as he gets older, in Southern California rather than in Northern Indiana.

Besides being close to elderly loved ones, the climate of the Pomona College campus, which as part of the Claremont Colleges consortium is 49 miles inland from the Santa Monica Pier, is a little hot in summer (average high 92 F in August), but close to ideal during the school year (average high 68 F [20 C] in January). Pomona is tied for #5 in USNWR’s list of national liberal arts colleges, behind only Williams, Amherst, Swarthmore, and Wellesley, so I imagine the pay for a tenured professor isn’t bad even if lower than at some research universities.

I wish Prof. Goins well in his choice.