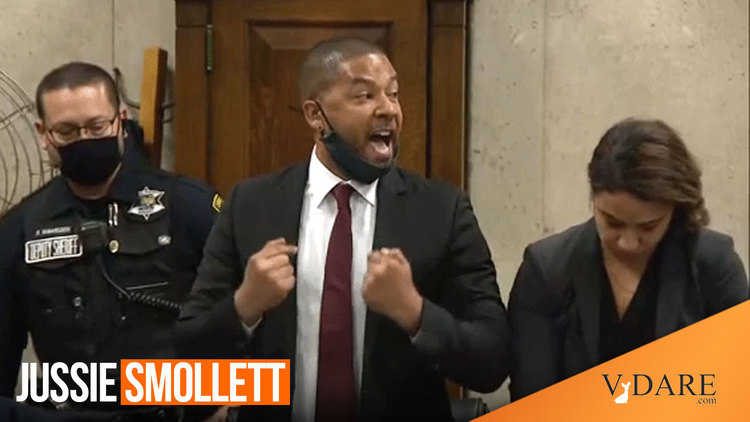 Jussie Smollett Did America A Favor: Now Hate Hoaxes Are A Thing People Know About

Earlier by John Derbyshire: Jussie's Hate Hoax: How Dumb Are The People Who Believed If?

Hate hoaxer Jussie Smollett finally got sentenced today: 150 days in jail and low 6 figures in fine and restitution for the wasted police investigation.

Jussie denied everything to the end and his grandmother, who explained that she could remember Joe McCarthy, darkly implied that the biased press had not uncovered the True Story.

Jussie, with his narcissism, did us a favor by memorably putting his name on a Thing that practically nobody had previously realized was a Thing. As I wrote in 2019:

To you or me, Jussie’s tale probably sounds like just about the stupidest hate hoax yet. But that’s because we possess the conceptual category of “hate hoax.” So it’s easy for us to call up from our memories a long list of such instances that previously dominated the headlines (for example, in this year alone, Covington Catholic and poor Jazmine Barnes) and conclude that, wow, this one is even more self-evidently absurd than the UVA fraternity initiation gang rape on broken glass hate hoax that bedazzled the national press in 2014.

In contrast, The New York Times, for instance, has never even printed the term “hate hoax.” Instead, there’s just an Epidemic of Hate perpetrated by what Tom Wolfe would call the Great White Defendants…and then there are forgotten random incidents that didn’t quite pan out. But to the prestige press there’s no such thing as a pattern of purported hate crimes routinely imploding embarrassingly.

Unfortunately for Jussie, he went to the police with his cock-and-bull story. That’s not the kind of mistake that Jackie Coakley of UVA made. She told endless variations of her story to everybody…except the cops, and has therefore gotten away scot-free.

Unlike the national media and presidential contenders, local police are perfectly familiar with the possibility that people sometimes lie to them. In fact, folks perjure themselves to cops all the time. They’re used to it. So cops, unlike candidates and commentators, don’t turn off their brains as soon as somebody invokes identity talismans such as race and sexual orientation.