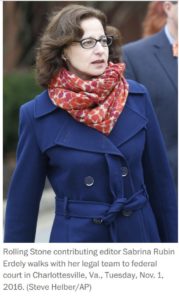 CHARLOTTESVILLE — A federal jury has awarded $3 million in damages to a former University of Virginia associate dean after finding that a Rolling Stone magazine article sullied her reputation by alleging that she was indifferent to allegations of a gang rape on campus.

The 10 jurors heard arguments for damages in the case Monday, determining that Nicole Eramo’s suffering should cost a reporter and Rolling Stone multiple millions as a result of the article, which was retracted after its serious flaws were exposed. Eramo testified during the trial that after the article published, she faced threats, lost her ability to pursue her life’s work as a sexual assault prevention advocate, and took a major hit to her professional credibility.

On Friday, the same jury found that the magazine and one of its journalists, Sabrina Rubin Erdely, was liable for defaming Eramo in a 9,000-word account of sexual assault published in November 2014.

The jury awarded Eramo $2 million from Erdely and $1 million from Rolling Stone, less than half of the original $7.5 million that Eramo sought when she filed her lawsuit in May 2015. But in judging the seriousness of Eramo’s false portrayal in the magazine, jurors still found considerable fault in the reporting and publishing of the story, deciding after more than two weeks of testimony and argument that Rolling Stone acted with “actual malice.”