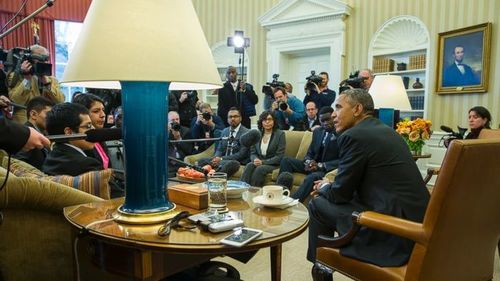 Above, Obama harboring illegal aliens in the White House—no American ever enters that building without valid photo ID

Judge Andrew Hanen in Texas has issued an injunction preventing Obama from giving work permits to illegals, although he can't an actually make Obama deport anyone.

The media, which is always happy to see any law discouraging illegal immigration thrown out, and never spends any time investigating the judges who do it, has spent a lot of time on Judge Hanen.

The federal judge in South Texas who temporarily blocked President Barack Obama's executive action on immigration once accused the Obama administration of participating in criminal conspiracies to smuggle children into the U.S. by helping reunite them with parents who live here illegally.

U.S. District Judge Andrew Hanen, who regularly handles border cases but wasn't known for being outspoken on immigration until that previous case, on Monday granted a request by a coalition of 26 states led by Texas to block Obama's action on immigration while a lawsuit to permanently stop the order goes through the courts. Obama's executive action could spare from deportation as many as 5 million people who are in the U.S. illegally.

Hanen, who's been on the federal court since 2002 after being nominated by President George W. Bush, spent several years handling the federal government's land condemnation cases to build the border fence, many times compelling government lawyers to slow down and take necessary procedural steps.

He expressed frustration, however, in a December 2013 order in an immigrant-smuggling case that he'd had four situations in a month in which children who arrived in the U.S. illegally alone were reunited with parents who were themselves in the country illegally.

Hanen sentenced a smuggler to 10 months in prison in that case but saved his most withering words for the U.S. government for not arresting and deporting the mother who hired the smuggler to get her 10-year-old daughter into the U.S. from El Salvador. The government has generally been temporarily reuniting such children with their relatives inside the United States pending deportation proceedings.

"Instead of arresting (the child's mother) for instigating the conspiracy to violate our border security laws, the (Homeland Security Department) delivered the child to her — thus successfully completing the mission of the criminal conspiracy," Hanen wrote.

The judge compared the cases to the government seizing weapons being smuggled across the border and delivering them to the criminals inside the United States who ordered them.

"DHS has simply chosen not to enforce the United States' border security laws," Hanen wrote. He said the government's failures to enforce immigration laws were "both dangerous and unconscionable," although he separately noted, "This court takes no position on the topic of immigration reform, nor should one read this opinion as a commentary on that issue."

Hanen grew up in Waco, Texas, graduated from Denison University in Ohio in 1975 and went to Baylor University School of Law in Waco, where he graduated first in his class in 1978, according to a biography provided by his office. He practiced civil trial law for more than 20 years in Houston.

Here's more from the MSM: