Joyce Carol Oates On Michael Brown , The Threat Of Black Crime, And The Evil People Who Don't Believe The Media Version

76 year-old novelist/retired academic Joyce Carol Oates is active on Twitter, and has said some interesting things about modern political correctness, but on the Michael Brown case she's in Nice White Lady mode and has totally bought into The Narrative:

The fallen body of Michael Brown has become a rallying symbol, not of the triumph of his killers but of racial injustice & sacrifice.

Ironically, if killers of Michael Brown had been more humane, they would have called ambulance & body would have been quickly removed. — Joyce Carol Oates (@JoyceCarolOates) August 26, 2014

East German Peter Fechter was shot down in August 1962. Tragic image of fallen young man whom no one was allowed to touch for one hour.

Apparently, people are complaining about Brown lying in the street after he was killed. Brown was pronounced dead at the scene, so his body was not take to the hospital immediately, the way it would have been if there had been any chance of saving him.

Instead, it was kept in situ, because Ferguson police immediately did the obligatory homicide investigation that must be done after every police shooting, treating the site of the shooting as a crime scene, even if it's going to turn out that the only crime that was committed was committed by the deceased. If they had moved him before the investigation was complete, they would have been accused of a coverup.

As a mystery novelist, Oates should know that people who find corpses are always told "For God's sake, don't move the body!" Anyhow, she's shocked that others aren't following The Narrative:

There is a Twitter unknown to many of us, like the dark side of the moon, in which #MikeBrown is a "black thug" & Darren Wilson a "hero." — Joyce Carol Oates (@JoyceCarolOates) August 26, 2014

In this Twitter landscape, "black thugs" are ubiquitous & Obama is their apologist, or perhaps a thug himself; Darren WIlson "God-fearing."

Those are called normal people, here's one:

A governor and three White House staffers at the funeral of a young man who attacked a cop. How's that feel, officer? — Bob Lonsberry (@BobLonsberry) August 25, 2014 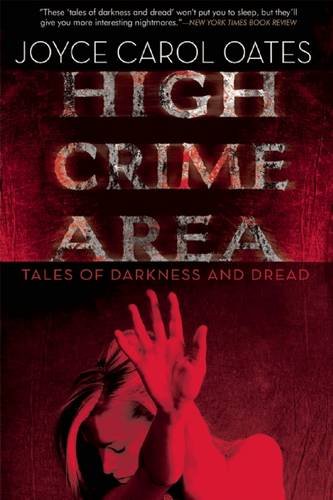 I would be tempted to ask if Ms. Oates had ever given issues of black crime a thought, but it turns out she has, and her thoughts are really bad—her web page mentions a book called High Crime Area: Tales of Darkness and Dread, and here's what it's about—treating black crime as myth, and self-defense as paranoia:

Joyce Carol Oates is an unparalleled investigator of human flaws. In these eight stories, she deftly tests the bonds between damaged individuals—a brother and sister, a teacher and student, two strangers on a subway—in the fearless prose for which she’s become so celebrated.

In the title story, a white aspiring professor is convinced she is being followed. No need to panic—she has a handgun stowed away in her purse, just in case. But when she turns to confront her black male shadow, the situation isn’t what she expects. In “The Rescuer,” a promising graduate student detours to inner-city Trenton, New Jersey, to save her brother from a downward spiral. But she soon finds out there may be more to his world than to hers.

And there's an excerpt:

One of them is following me. I think it must be the same (male, black) figure I’ve seen in the past. But I could be mistaken.

From the rear entrance of Starret Hall at the edge of the Wayne State University campus, through faculty parking B, along a littered pedestrian walkway that opens onto Cass Avenue —I am aware of this lone figure behind me as you’d be aware of small flames licking at the edge of your vision. Thinking There is no one. And even if there is someone, I will not look.

Ascending concrete steps, nearly turning an ankle. Walking too quickly. Will not look!

It’s 6:25 P.M. Not yet dusk. Not yet, the bright arc lights that illuminate certain near-deserted walkways and corners of the sprawling urban campus.

For days the sky above Detroit has been overcast and wintry. A fine red-ashy haze when shards of sun push through the clouds, from factories in River Rouge. As the sky darkens, the air seems to coarsen. Your eyes and lungs smart, it’s a mistake to walk too quickly—in the desolate streets at this edge of the University, a hurrying figure is an alarming sight.

I am prepared, this time: I am armed.

Of course, we know from the blurb that the black guy following her is going to  turn out to be harmless and lovable (would be played by Morgan Freeman in the movie) and she's an unconscious racist.

Miss Prism: The good ended happily, and the bad unhappily. That is what Fiction means.[Oscar Wilde, The Importance of Being Earnest]