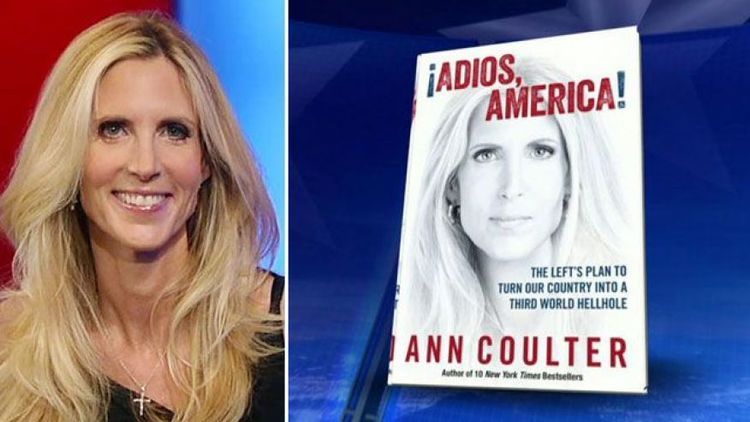 Ann Coulter has a new book coming out on today, title: Adios, America! The Left's Plan to Turn Our Country into a Third World Hellhole.

Ann has done a very clever and wonderful thing. By selling millions of books — this is I think her eleventh — and building up a big following, she has got herself up to a status where she can't be ignored. She also has positions — to the best of my judgment, sincerely-held positions — that make her palatable to neocon outlets like Fox News.

Thus positioned, Ann can say things in the mass media that no-one else is saying and that, if any other person were saying them, that person would be banned for life from all major outlets.

She can say, for example, and does say in this new book, that:

Those are useful things to know when contemplating our nation's immigration policy; yet nobody of any prominence in our public debates, other than Ann, is saying them. For darn sure, no politician is saying them, squirming yellow cowards that our politicians are.

Well, Ann's saying them, and she's gotten herself into a position where they can't shut her up.

VDARE.com note: You can buy it on Amazon Kindle and be reading it instantly, or go to Ann Coulter's website and get an autographed copy from her.