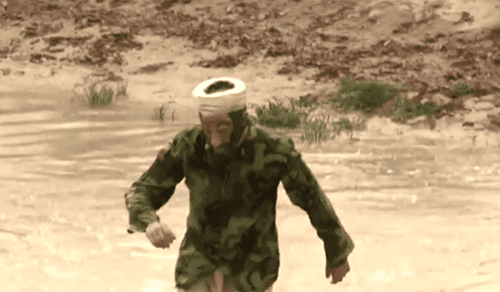 In September, two illegal alien Pakistan residents known to have terror associations were snagged by authorities near San Diego, a fact just being reported now.

It’s not exactly news that foreigners from unfriendly nations (AKA Special Interest Aliens) cross Obama’s welcoming border, but these recent characters have a rap sheet which makes them different. Still, the security threat is huge because of the administration’s willingness to swap safety for future Democrat voters. Earlier this month, several Middle Eastern men were arrested south of Tucson, and two of the group had stainless steel cylinders in their backpacks.

In November, Sharyl Attkisson reported Syrians, Afghanis and Pakistanis were caught crossing the border illegally. Unless foreigners have a pre-existing record, they are given a court date to appear and released. A frustrated Border Patrol agent complained, “The truth is, anyone can get into this country and stay. It’s not possible that we don’t have any ISIS sympathizers here. It’s just too easy for them to get here.”

You have to wonder how many jihadist enemies of America haven’t been caught sneaking in.

When the U.S. Border Patrol nabbed two Pakistani men with ties to terrorism at the U.S.-Mexico border in September, it marked just the latest instance of illegal immigrants from so-called “special interest countries” using the southern border as a point of entry into the country.

Muhammad Azeem and Mukhtar Ahmad, both in their 20s and from Gujrat, were caught Sept. 20 by agents south of San Diego and just over the international border from Tijuana. When agents checked their identities through databases, they got hits on both of them: Mr. Ahmad popped up as an associate of a known or suspected terrorist, while Mr. Azeem’s information had been shared by a foreign government for intelligence purposes.

Both men had been processed two months earlier by immigration officials in Panama, suggesting they took advantage of smuggling networks or other routes increasingly used by Central American illegal immigrants to sneak into the U.S.

It comes as lawmakers on Capitol Hill are increasingly worried about potential terrorists gaining entry to the U.S. through the border with Mexico or taking advantage of lax screening elsewhere in the immigration system.

“The southern land border remains vulnerable to intrusion and exists as a point of extreme vulnerability,” Rep. Duncan Hunter, California Republican, wrote in a letter to Homeland Security Secretary Jeh Johnson last week demanding to know how many people in the FBI’s terrorist screening database have been caught at the border.

“Evidently there are criminal organizations and individuals with the networks and know-how to facilitate illegal entry into the United States without regard for one’s intentions or status on a terrorist watchlist,” Mr. Hunter wrote. “The detention of the two Pakistani nationals underscores the fact that any serious effort to secure our homeland must include effective border security and immigration enforcement.”

The FBI, whose agents were brought in to interview the two men, declined to talk about the case, saying it had “no information to provide.”

The Border Patrol turned the men over to U.S. Immigration and Customs Enforcement (ICE), which said they have been in custody since September and are being held while they face immigration court proceedings.

But other similar incidents have raised increasingly urgent questions about the extent to which terrorists can take advantage of smuggling networks in Latin America.

A year before the two Pakistani men were caught, the Border Patrol apprehended four Kurdish men who said they were part of the Revolutionary People’s Liberation Front/Party, which is listed by the U.S. as a terrorist organization. Mr. Johnson, the Homeland Security secretary, said the four were actually members of the Kurdish Workers’ Party, which is also listed as a terrorist organization by the U.S. government.

The Washington Times reported last year that the four men had paid $8,000 each to be smuggled from Istanbul through Paris to Mexico City, where they were kept by a smuggling network before being driven to the U.S. border. Their trip highlighted the existence of smuggling networks capable of getting terrorists from the Middle East to the U.S. border.

Earlier this winter two Syrian families sparked a furor when they showed up at the U.S.-Mexico border demanding asylum.

That case came amid a raging national debate pitting the Obama administration against dozens of U.S. governors and most of the Republican 2016 presidential field over the wisdom of allowing refugees from Syria and other Middle Eastern hot spots to resettle in America. Critics said there were inadequate screening procedures for the refugees in their home countries, raising the possibility the Islamic State or other terrorists could infiltrate their ranks and enter the U.S.

Terrorists’ potential entry points into the U.S. have been hotly debated since the Sept. 11, 2001, attacks, which saw many of the hijackers enter on legal visas but remain in the country after their permission had expired.

The woman involved in the recent California terrorist attack was admitted on a fiancee visa.

In the case of the two Pakistani men, they both approached a Border Patrol agent who was doing line duty at a location known as the Libertad Hump.

It’s unclear if they asserted an asylum claim or made some other defense.

Border Patrol agents determined the two had been screened in Panama in late July, though documents didn’t say how they spent the intervening two months before they were apprehended at the U.S.-Mexico border.

ICE said it has taken steps to try to combat smuggling networks, and particularly those that threaten U.S. national security interests, through its Homeland Security Investigations unit.

“HSI places special priority on organizations known to transport individuals from countries with ties to terrorism,” ICE said in a statement to The Times. “Our primary concern is closing the illicit pathways that may pose a threat to our national security. We use investigative, prosecutorial and intelligence resources to target and aggressively pursue, disrupt and dismantle foreign-based criminal travel networks — particularly those involved in the movement of individuals from countries of national security concern.”

The agency didn’t provide details on individuals on those terrorism-related investigations, but said overall in 2013 and 2014 the unity operation arrested nearly 6,000 people in connection with human smuggling.