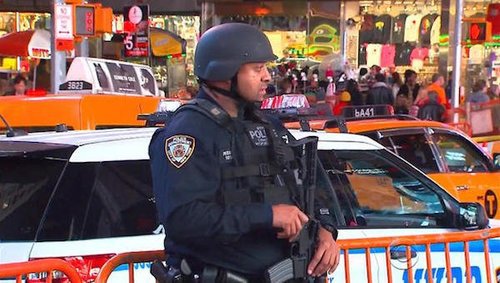 It’s almost New Year’s, and the police who keep us safe are doubling down on jihad prevention measures because of the threat from the unfriendly Muslims the government keeps importing. The media scolds us daily for thinking unkind thoughts about Islamics, yet we see the New Normal that their presence has caused — Paris church-goers having their bags checked at Christmas and American parks like Disneyland adding metal-detector screening for entrance, to name a couple examples.

In Europe, Brussels has already cancelled its fireworks show because of the terror risk. Police arrested two men there a couple days ago for plotting a holiday attack. Six more were detained later. Belgium’s Muslim residents, particularly Sharia4Belgium, impressed Dale Hurd enough with their jihad enthusiasm for him to warn about Belgistan in 2012.

Breitbart has detailed the rollback of New Year’s celebrations all across the continent: The Collapse of Old Europe in 2015: Not with a Bang, but with a Whimper.

Remember, before Muslim immigration, the only drawbacks to a New York New Years Eve were cold weather and crowds. Now America has to deal with immigrants who want to murder us all and institute a totalitarian world caliphate.

Plus, the security measures in New York’s Times Square don’t sound like an evening of fun: no backpacks, no alcohol and no bathrooms inside the security corral. A long freezing night without a bottle of Jack to warm the soul? The extreme safety measures are more examples of how immigration of unfriendlies means less freedom.

This extra policing must cost taxpayers a bloody fortune, but media reports normally omit that detail, perhaps so citizens won’t reflect on the expense of unwise immigration.

Authorities are stepping up security for New Year’s Eve celebrations across the U.S. as revelers prepare to welcome 2016 amid widespread nervousness after recent terror attacks in Paris and San Bernardino, Calif.

In America’s two largest cities, officials assured the public Wednesday that there were no known credible threats against either New York or Los Angeles ahead of three of the most famous New Year’s events on the calendar.

“Leave the worrying to the NYPD,” said James O’Neill, chief of the department. “People should feel safest this New Year’s Eve because we’re there.”

About 1 million people are expected to pack the blocks around Times Square Thursday night to watch the 11,875-pound Waterford crystal ball drop, marking the official start of 2016.

At least 6,000 NYPD patrol officers will be assigned to the Times Square festivities, between 600 and 800 more than on New Year’s Eve 2014. Visitors will see heavily armed counterterrorism teams and bomb-sniffing dogs. Rooftop patrols and NYPD helicopters will keep an eye on the crowd, and plainclothes officers will blend in with revelers. Newly graduated officers will take part.

“On New Year’s Eve, the department will be out in force,” Mayor Bill de Blasio said Tuesday at a news conference in Times Square. “There will be a tremendous number of officers you will see and many you won’t see.”

Partiers will be screened with hand-held metal detectors twice — once when entering one of the 14 access points to the “secure zone” and again when they enter “pens” where people will be kept during the leadup to the countdown.

A bomb squad and a unit specializing in chemical and biological threats will sweep hotels, theaters, construction sites and parking garages. They also will patrol the Times Square subway station, and certain exits will be blocked off. The NYPD will rely on a network of thousands of closed-circuit security cameras blanketing lower Manhattan, parts of midtown Manhattan and the subway system. About 20,000 smartphones were handed out to officers this year that will allow police to quickly transmit information on potential threats.

Yet officials also acknowledged that there were limits to what they could do to ensure security, especially outside the tightly controlled blocks at the heart of the celebration. In much of the city, the focus will be on fast responses to any emergency rather than preventive measures like security checkpoints.

“The ability to protect everything all the time everywhere is not possible in any venue anywhere in the world,” said New York Police Commissioner William Bratton.

On Wednesday, Los Angeles officials said they were aware of a threat passed on to U.S. officials from a single source overseas that warned of possible attacks on New York, Los Angeles and Washington D.C. between Christmas and New Year’s.

“We are aware of it, Major Crimes (Division) is aware of it, but it’s nothing specific,” LAPD spokesman Ricardo Hernandez told Fox 11.

The LAPD’s elite Metropolitan Division will be on maximum deployment and the Central Division will have extra officers on hand downtown, where various celebrations are planned, including a free block party in Grand Park that’s expected to draw about 50,000 revelers.

On Friday morning, hundreds of thousands will line the streets of Pasadena for the annual Tournament of Roses Parade, while another 90,000-plus are expected to pack the Rose Bowl stadium that afternoon for the Rose Bowl game between Stanford and Iowa.

“Increased visible and non-visible enhanced security measures will be in effect along the Rose Parade route and at the Rose Bowl stadium.” said William Boyer, spokesman for the city of Pasadena.