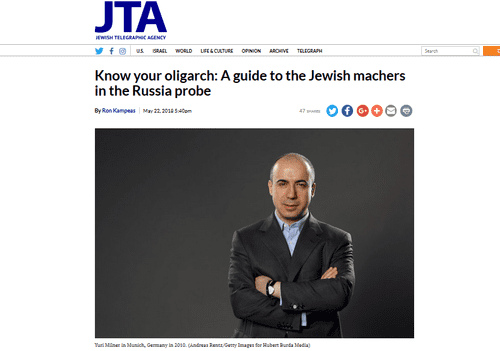 Jewish Telegraph Agency: "A Guide to the Jewish Machers in the Russia Probe"

From reading Establishment writers, such as New York Times deputy Washington editor Jonathan Weisman’s recent book (((Semitism))): Being Jewish in America in the Age of Trump, it’s clear that the conventional wisdom propounders among the US media believe implicitly but wholeheartedly in a conspiracy theory about a vast globe-spanning anti-Semitic Putin-Trump plot.

After all, haven’t you seen Fiddler on the Roof? The Czar is always out to get us poor Jews.

One problem with this popular conspiracy theory, though, is that both Trump and Putin, not to mention the third triumvir, Netanyahu, are quite close to many rich and powerful Jews. Thus, from the Jewish Telegraph Agency wire service:

Know your oligarch: A guide to the Jewish machers in the Russia probe

WASHINGTON (JTA) — The special prosecutor’s probe into Russian meddling in the 2016 election offers an unsettling journey for anyone steeped in Russian Jewry, and the transition from the repression of the former Soviet Union to the relative freedoms of the Russian Federation.

Of 10 billionaires with Kremlin ties who funneled political contributions to Donald Trump and a number of top Republican leaders, at least five are Jewish. (The Dallas Morning News has a handy set of interactive charts.)

There’s Len Blavatnik, the dual British-American citizen who dumped huge amounts of cash on Republican candidates in the last election cycle, much of it funneled through his myriad investment firms. (The same Len Blavatnik funds scholarships for IDF veterans and who is friends with Israeli Prime Minister Benjamin Netanyahu.) …

But first: What was going on in the Soviet Union as it headed towards collapse in the late 1980s that led to the proliferation of Jewish names among its powerful business leaders?

“Not all oligarchs are Jewish, of course, not the majority, but there is a significant number,” said Mark Levin, the CEO of the National Coalition Supporting Eurasian Jewry, who joined its predecessor, the National Council on Soviet Jewry, in 1980 as a staffer. “They were in the right place at the right time.”

As Yale law professor Amy Chua pointed out in 2003, the various important Jewish angles to the world-historical events going on in Russia in the 1990s are remarkably little known in the U.S. Fortunately, the JTA goes on to provide some helpful analytical background:

Here are some of the factors that put them in the “right place at the right time.”

You can go home again

Many Soviet Jews left the country because bigotry and punitive Soviet policies kept them, among other indignities, from getting jobs in their preferred professions. But with the collapse of the USSR, and with opportunities opening up at home, a number of these younger emigrants drew on the entrepreneurial strain, training and connections they found in their new countries, be it the United States, Britain and Israel.

In the late 1980s, when they heard that the policy of glasnost was loosening up markets, a number of them traveled back to their homeland seeking opportunity, armed with savvy and with moneyed connections in their new countries. They were in place after 1991 when Russia and its former republics rapidly privatized everything from mines to media. …

The Jews who stayed behind kept in touch with friends and family who were succeeding overseas and were able to tap them for investment opportunities.

“Jews in the ex-USSR had a ready-made network of trusted contacts in the U.S. and Israel who they could go into business with,” said Oliver Bullough, a British author and journalist whose expertise is Russian history and politics. “It was harder for Russians who had no contacts abroad to achieve this. This also, in my opinion, explains why ex-KGB people did well since they had a network of former spies in other countries.”

Glasnost, or openness, instituted by Mikhail Gorbachev, the last Soviet leader, included opening up plum government jobs to minorities that had previously been marginalized. That accelerated Jewish entry into higher ranks of the bureaucracy just when it was opportune to be in a position to know what sector was about to be privatized, and which government-owned business was about to be broken up.

It helped that unlike communist regimes in eastern Europe, Levin said, in Russia and the former Soviet republics, the elites remained in place — only the ideology of communism was jettisoned.

“Russia and most successor states of the Soviet Union went through a much different transformation than the former communist Europe nations,” he said. “Most of the governing elite didn’t change.”

Moreover, the very professions to which Jews were restricted under the old Soviet system were the ones that proved useful in the new economy. Jews, Levin said, were likelier to be entrepreneurs.

“There were Jews who were helping to make the transition from a command economy to a market economy,” he said.

Author Michael Wolff, profiling tech entrepreneur Yuri Milner in 20111, wrote, “The Jews in Soviet Russia, often kept from taking official career paths, came to thrive in the gray and black markets. Hence, they were among the only capitalists in Russia when capitalism emerged.” …