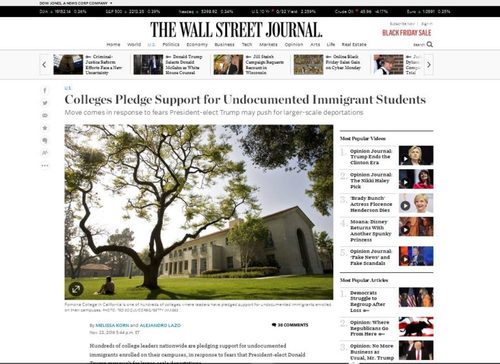 Another scofflaw University President has laid down a challenge to President-Elect Trump and Attorney General-Designate Jefferson Beauregard Sessions  III.  This time it's a private post-secondary school, New York University (NYU). This is getting to be a pattern of behavior, obviously well organized.  It is an open conspiracy among heads of post-secondary schools to defy Federal law.  The scofflaws even had the temerity to write a letter to the President-Elect announcing their intention to engage in an ongoing criminal conspiracy. Despite their high academic status, from the law enforcement point of view, this qualifies as “Not too bright. “

This is not mere virtue signaling, it is a direct challenge to Federal law and the supremacy of the Constitution.

To our country’s leaders we say that DACA should be upheld, continued, and expanded. We are prepared to meet with you to present our case. This is both a moral imperative and a national necessity. America needs talent – and these students, who have been raised and educated in the United States, are already part of our national community. They represent what is best about America, and as scholars and leaders they are essential to the future.

However, Andrew Hamilton, President of NYU, has gone a step further.  Hamilton [Email him] went beyond the issue of the Deferred Action For Childhood Arrivals (DACA) , which the Obama Administration has admitted gives the recipients no legal status, and proclaimed that he will continue to enroll and provide financial assistance to all illegal aliens attending NYU—not just those with the fictional DACA status.

Hamilton is also a signatory to the rude letter to President-Elect Trump.  They requested a meeting with Trump to discuss the issue, so perhaps Trump should invite them to the White House or Trump Tower, then have them frog-marched out in a perp walk for violating Title 8 United States Code Section 1324.  (The law hat prohibits aiding illegal aliens. ) That would be a perfect Trump maneuver in furtherance of draining the swamp, showing no one is above the law, and sticking it to the establishment that hates him.

Also worth noting—Hamilton implies that illegal aliens are employed at NYU:

"Documented or undocumented, these are our peers, colleagues and friends," he added.

This is a separate violation of Federal law, Title 8 USC 1324a, Unlawful Employment of Aliens.

Throughout the letter though, Hamilton equivocates on support and protection of illegal aliens, first claiming to protect illegals from the Department of Homeland Security, but then admitting that NYU will comply with subpoenas.

Hamilton said the school at all times will not share immigration information with the federal government, only cooperating in instances when they are required to by a subpoena or warrant.

So, some advice to illegal alien students and employees at NYU, U.S. Immigration and Customs Enforcement (ICE), both Homeland Security Investigations (HSI) and Enforcement and Removal Operations (ERO) have administrative subpoena authority, so there is no protection for your records! Just as there's no protection  for those not so bright illegals who signed up for DACA and driver's licenses.

Hamilton admits to the public that NYU also provides financial aid to illegal alien students, making any prosecution of Hamilton and subordinate employees at NYU that much easier for the Department of Justice.

University financial assistance to non-citizens (documented and undocumented) is independent of federal financial aid programs and will continue regardless of changes in national policy. We will continuously evaluate the situation of our students to ensure that we are maximizing benefits within our financial constraints.

Like Janet Napolitano, Andrew Hamilton has directly challenged Donald J. Trump.  Trump cannot back down now, not without letting every opponent in the future know that he is all talk and no action.

Whether  Trump is dealing with  Democrats, Red China, Iran, Cultural Marxists or cuckservatives, all will be looking for weakness.  And the President can't show weakness or he’ll end up looking like Obama on Syria—drawing red lines, then rolling right over.

There is no political downside to arresting and prosecuting these scofflaws, especially as New York and California are deep blue States with no chance of being flipped 4 years from now.  Strike while the iron is hot!