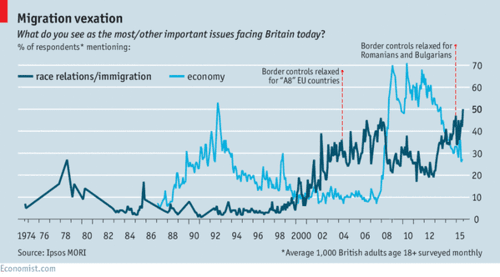 Is Donald Trump Cool? His Politics Are The Latest European Fashion!

On the one hand, he’s been around forever, his tastes are cheesy/expensive, and the media has, as you may have noticed, been squealing nonstop for months that he’s Not Cool.

On the other hand, he’s not from Flyoverville. He’s about as New York as you can get.

And yet, he’s an old-fashioned in-your-face New Yorker of the kind celebrated by Colin Quinn. But then that’s also the “problematic” type who make new SWPL New Yorkers uncomfortable: What would our stylistic betters in Europe think of this crass American?

Except, that Trump’s winning issue, what has distinguished him from the pack — immigration — is exactly the issue that obsesses Europeans in 2015. For example, above is a new graph from The Economist showing immigration as an important issue in Britain hitting a new historic high in the latest poll.

So Trump is on the cutting edge of Euro fashion.