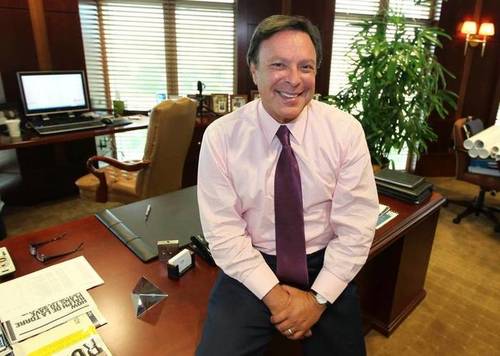 Remember when they made Trump sign a document pledging to support the GOP nominee even if it isn't him?

So why is it just a one-way street?

Mike Fernandez, the Cuban-born white Hispanic chairman of MBF Healthcare Partners, is a big-time Miami donor of Jeb Bush. Fernandez has publicly stated that if the general election pits Trump against Hillary, he'd go for Hillary.

One of Florida’s biggest conservative Republican moneymen — and a billionaire backer of Jeb Bush — is so disgusted by Donald Trump’s candidacy that if he has to, he’ll do the unthinkable:  “If I have a choice — and you can put it in bold — if I have a choice between Trump and Hillary Clinton, I’m choosing Hillary,” Miami healthcare magnate Mike Fernandez told the Miami Herald on Friday. “She’s the lesser of two evils.” Top Jeb Bush political donor in Miami: I'll vote for Hillary Clinton over Donald Trump,  by Patricia Mazzei, Miami Herald, December 4, 2015

Ok, there you have it, we know where Hernandez and his billions of dollars stand.   So my question to grassroots  Republicans is, why should you take seriously what he and similarly-inclined plutocrats think of the future of the party?

Outraged by Trump’s unimpeded ascent, Fernandez is taking on the GOP frontrunner himself. He purchased a full-page ad in the upcoming Sunday edition of the Herald calling Trump a “narcissistic BULLYionaire with a hunger to be adored.” He also likened him to some of history’s bloodiest demagogues. “You have no idea how furious I am with my friends in the Republican Party who have embraced this guy,” Fernandez said.

Fernandez, who also plans to run the ads in Des Moines and Las Vegas newspapers on Dec. 14, said he didn’t notify the Bush campaign of his plans. Fernandez was the single highest donor to the political committee backing Bush, Right to Rise USA, as of the last financial disclosure report at the end of June. His contribution: more than $3 million....

Fernandez’s move comes as some Republican donors have started to organize  against Trump, though their efforts so far have been scattered. Trump has flummoxed the party order, which assumed all along that the bombastic real-estate tycoon’s popularity would eventually fade. He has led polls nationally and in the early states of Iowa and New Hampshire for more than three months.

There's plenty more in the article, check it out if you like.

But note that not everybody with a Spanish surname is buying it.  Check out what a certain Jorge Martinez says in the comments section:

Big pocket donors, who own the political establishment, are scared of someone who will not be a puppet to them. #MakingAmericaGreatAgain