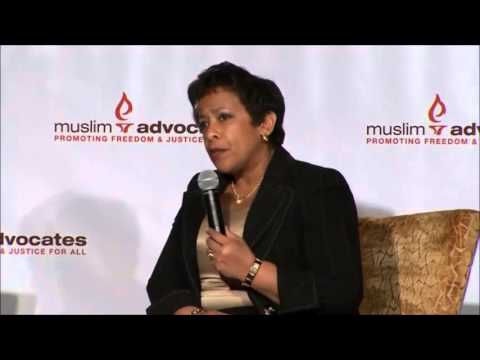 Before the installation of Loretta Lynch as Attorney General, Senator Jeff Sessions (not for nothing called "America's Senator") said he wouldn't support her nomination because she supported the right of illegal aliens to work in this country. Sessions was right, but she was confirmed anyway.

Now we see that Attorney General Lynch is also a danger to freedom of speech. From the Daily Wire:

The day after a horrific shooting spree by what appears to be a radicalized Muslim man and his partner in San Bernardino, California, Attorney General Loretta Lynch pledged to a Muslim advocacy and lobbying group that she would take aggressive action against anyone who used "anti-Muslim rhetoric" that "edges toward violence."

Speaking to the audience at the Muslim Advocates' 10th anniversary dinner Thursday, Lynch said her "greatest fear" is the "incredibly disturbing rise of anti-Muslim rhetoric" in America and vowed to prosecute any guilty of what she deemed violence-inspiring speech.

Loretta Lynch Vows to Procecute Those Who use 'Anti-Muslim' Speech That 'Edges Toward Violence' By James Barrett, Daily Wire, December 4, 2015

Let that sink in. The "greatest fear" of the nation's chief law enforcement officer is not Islamic terrorism carried out against Americans. Instead, her "greatest fear" is "anti-Muslim rhetoric" in the United States. That's rather astonishing when you sit back and consider it.

At least we know where she stands.

"The fear that you have just mentioned is in fact my greatest fear as a prosecutor, as someone who is sworn to the protection of all of the American people, which is that the rhetoric will be accompanied by acts of violence," she said. "Now obviously this is a country that is based on free speech, but when it edges towards violence, when we see the potential for someone lifting that mantle of anti-Muslim rhetoric—or, as we saw after 9/11, violence directed at individuals who may not even be Muslims but perceived to be Muslims, and they will suffer just as much—when we see that we will take action," said Lynch.......

It is painfully clear that, like her predecessor Eric Holder, Lynch is far more concerned with promoting the social justice agenda than protecting the Constitutional rights of American citizens. What exactly is speech that "edges toward violence"? What exactly are "actions predicated on violent talk"? In the end, it is whatever she decides it to mean.

And the article adds this interesting update about another Loretta Lynch comment made at a press conference on December 3rd:

We’re at the point where these issues have come together really like never before in law enforcement thought and in our nation’s history and it gives us a wonderful opportunity and a wonderful moment to really make significant change.

What? What kind of "change" is being referred to?