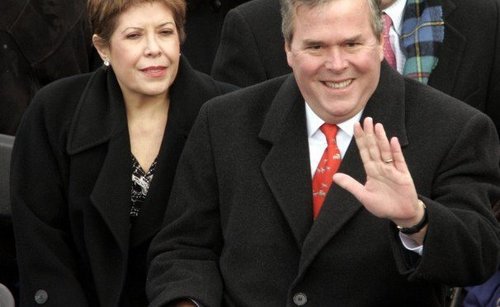 This morning on ABC News, Jeb Bush unleashed what may be his most full-throated response yet to the rise of Donald Trump. The quote that will drive the headlines is that Bush said Trump wants to “insult his way to the presidency.”

But that’s not the most important part of Bush’s remarkable monologue. The more significant part of it was the challenge it represents to GOP primary voters.

To recap, Trump had mocked Bush for speaking in Spanish, claiming that he “should really set the example by speaking English while in the United States.” Apparently it’s self-evidently ludicrous for a Republican presidential candidate to try to appeal to Latino voters by speaking their language. Bush’s response is worth quoting at length:

“Donald Trump is trying to insult his way to the presidency. It’s not gonna work. People want an uplifting, hopeful message. People come to this country to pursue their dreams. Sometimes they start without speaking English. But they learn English. And they add vitality to our country.

What this shows, I think, is that Jeb Bush’s claim last year that illegal immigration is an “act of love” continues to be a seminal moment that perfectly captured the split among Republicans over the issue.

Sometimes they start without speaking English. But they learn English.

Okay, but has Columba Bush learned to speak English yet? Has the Presidential candidate’s wife learned English well enough in her 40 years of marriage to be interviewed in English without pre-arranged questions?

I would hope she’s learned English well enough to converse in it in her 40+ years of marriage to Jeb. But I just don’t have evidence of that yet.

The most fundamental issue in politics is “Whose side are you on?” Jeb, who is not a particularly slippery individual, has given us much evidence that primarily he’s on the side of Mexicans, not Americans.

That strikes me as an honorable position, just not one I’d want in my President.

Look, Jeb has been reasonably straightforward about the fact that, emotionally, he prefers Mexicans to Americans. If we Americans are too dumb to figure out the implications of what’s Jeb’s been repeatedly hinting at, well, I guess we deserve what we have coming from a third Bush Administration.

You won’t be able to say Jeb didn’t warn us.