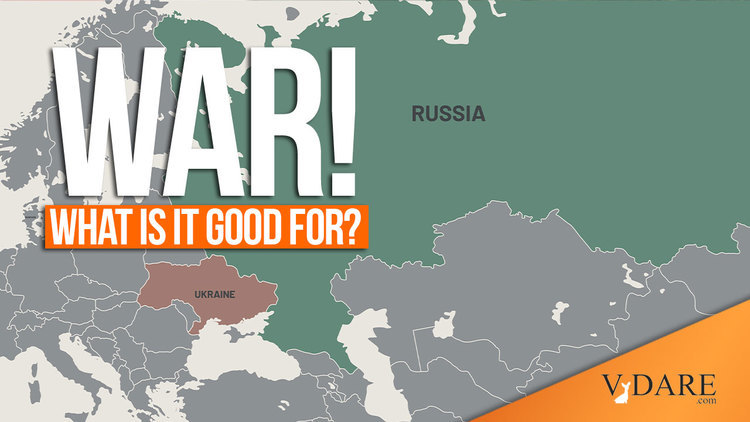 Japan's Ministry of Defense: Wars of Conquest Are No Longer Allowed Japan underscored the potentially long-lasting impact of the war in Ukraine on the Indo-Pacific region in its annual defense white paper released Friday, devoting an entirely new section to the conflict and its implications for Asia.

The focus on the ongoing conflict thousands of kilometers away comes as Japan looks warily at military powerhouse China and its plans for self-ruled Taiwan, with Prime Minister Fumio Kishida warning repeatedly that “Ukraine today may be East Asia tomorrow.”

“If Russia’s aggression is tolerated, it may give the wrong impression that unilateral changes in the status quo are allowed in other regions, including Asia,” the white paper said. …

Wars of territorial conquest were once the chief occupation of kings. But around the turn of the 20th century, smart guys started to think that war didn’t pay anymore.

In 1891, Friedrich Engels, following the death of his collaborator Karl Marx, started advising Leftists that their hopes of the workers winning a revolutionary street fight at the barricades against a standing army with modern weapons were a pipe dream.

As it happened, the Russian army was so demoralized in 1917 that it didn’t bother to fight against the Bolsheviks (perhaps testimony to Russian moodiness), but even the defeated armies of central Europe didn’t have all that much trouble in 1919 crushing Bolshevik uprisings in their countries.

In 1910, Norman Angell published The Great Illusion, which argued that conquest no longer paid. For instance, “the incentive [of the local conquered population] to produce would be sapped and the conquered area be rendered worthless. Thus, the conquering power had to leave property in the hands of the local population while incurring the costs of conquest and occupation.”

Many laugh at Angell because four years later the Great War broke out. Then again, win or lose, World War I proved a catastrophe for all the European powers that participated.

I call it the Dirt Theory of War. In the past, the payoff for war consisted of farmland and mines. But later, the economy shifted toward buildings and the enthusiastic cooperation of the people who worked in buildings. Blowing up the buildings is unlikely to inspire the survivors to cooperate intelligently and ardently.

Over time, wars of conquest and territorial annexation fell out of fashion, especially after WWI. For instance, the Republican Coolidge Administration promoted the Kellogg-Briand pact of 1928 to outlaw aggressive war.

Some felt that this was unfair because Calvin Coolidge already ruled a vast continent, while their own countries were in danger of starvation.

But Hitler didn’t realize that the Haber-Bosch process meant that his worldview was out of date.

But because it was, even the losers of WWII such as Germany and Japan got to keep the majority of their territory.

After about 1950, wars of territorial conquest became rarer. Generally speaking, territorial enlargement has been frowned upon.

Argentina’s 1982 invasion of sub-Arctic Falklands (an exceptionally stupid exemplification of Angell’s law that conquest no longer pays) and Iraq’s invasion of oil-rich Kuwait (a pretty reasonable exception to Angell’s law: conquest of an oil-rich country that hasn’t bothered to make allies might pay off) showed that conservative Anglo-American regimes might object.

For example, Israel’s conquests that expanded its paltry UN-allotted 1947 borders to its more defensible 1948 borders were generally accepted. On the other hand, Israel’s 1967 conquests have been controversial for the last 55 years, although the Trump-Kushner Administration was more accepting.