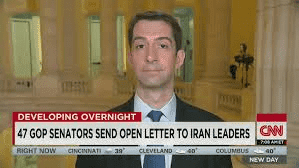 Who paid for this message?

The Democratic Establishment is very concerned that President Obama’s insistence on ending America’s generation-long confrontation with Iran will get embarrassingly derailed in Congress. So they are reacting in characteristic fashion by attacking their opponents’ finances.

The NYT story sneers that Republicans

...are more fervently pro-Israel than ever, partly a result of ideology, but also a product of a surge in donations and campaign spending on their behalf by a small group of wealthy donors.

Republicans currently in the Senate raised more money during the 2014 election cycle in direct, federally regulated campaign contributions from individuals and political action committees deemed pro-Israel than their Democratic counterparts, according to data compiled by the Center for Responsive Politics and analyzed for The New York Times by a second nonprofit, MapLight. The Republican advantage was the first in more than a decade.

Speaking of Senator Tom Cotton, the Arkansas freshman who orchestrated 46 of his colleagues into signing a letter aimed at sabotaging the negotiations, the Times notes

…few candidates have benefited as much as Mr. Cotton.

The political action committee run by John Bolton, the United Nations ambassador under President George W. Bush and an outspoken supporter of Israel, spent at least $825,000 to support Mr. Cotton. That PAC is in part financed by other major pro-Israel donors, including Irving and Cherna Moskowitz of Miami, who contributed 99 percent of their $1.1 million in 2012 races to Republican candidates and causes.

After the Netanyahu speech to Congress last month

…some of the nation’s most important pro-Israel donors, including Mr. Adelson, gathered with more than a dozen Republican members of Congress at the nearby Capitol Hill Club. “It was a love fest,” said Kenneth J. Bialkin, a corporate lawyer and donor who attended.

So determined was the Times to make its case that it reached into the wilderness to quote our former colleague Scott McConnell:

The shift has also meant the Republican Party today accepts little dissent on the topic of Israel, said Scott McConnell, a founding editor of The American Conservative, an outcome he believes is in part driven by the demands of financial supporters.

“Republicans interested in foreign policy used to understand that it was not in America’s national interest to ignore entirely Arab claims against Israel,” he said. “Now, there is a fanatical feeling of one-sidedness.”

Foreign Policy is not a VDARE.com topic but we have repeatedly documented that the same process of corruption has been at work in the GOP over immigration policy: Why Has GOP Leadership Spurned Base, Election And Constitution? Severe ADD (Adelson Dollar Disorder)! On Paul Singer, see James Fulford’s POLITICO: Paul Singer, Plutocrats Plot To Buy GOP. Do They Think It Comes With Voters?

Just like Bill Moyers the other day, the New York Times of course did not choose buttress its case by citing the parallel immigration policy situation. But perhaps now it is respectable to name Donor influence the timid Inside the Beltway immigration restraint outfits will get the courage to do so. They have dodged the issue with the fine exception I noted in Kosher At Last: FAIR Breaks Taboo, Protests Big Donor Corruption Of GOP Leaders in January 2014.