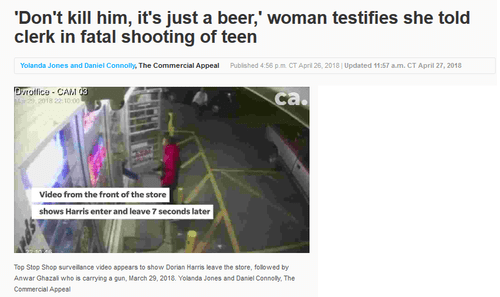 There is a growing trend in news stories that doesn't seem to be getting much national attention. Since March, there has been a series of high profile shootings where an immigrant store employee murders an unarmed black customer apparently in cold blood.

Of course, there's usually some incident which precedes the fatal shooting that involves some bad behavior from the black customer but in all the stories described below, none of the claimed conduct rose to the level where lethal force was required to defend the employee's life or the life of another person.

The first story was in North Memphis where convenience store clerk Anwar Ghazali shot a fleeing shoplifter. Surveillance video from the store showed 17-year-old Dorian Harris leaving the store after allegedly stealing a wine cooler. Ghazali quickly chases after him with a gun and shoots at Harris as he is running off. A witness at the scene would later tell investigators that Ghazali said "I think I shot him." While shoplifting is obviously wrong, fatally shooting a fleeing thief who committed a petit larceny from behind is indefensible both from a traditional western moral and legal perspective.

One of the most egregious details from the story is that Ghazali never even called 911 to report what occurred!

Police said Ghazali never called to report the shooting or the theft. Harris, who was shot once in the left thigh, was not found until two days later when a resident discovered his body in the backyard of their house on Springdale about 100 yards north of the convenience store.

'Don't kill him, it's just a beer,' woman testifies she told clerk in fatal shooting of teen, Yolanda Jones and Daniel Connolly, The Commercial Appeal, April 26, 2018

The next incident occurred in Miami-Dade where a store clerk, 45-year-old Ghazi Salhout, allegedly shot an unarmed customer after an argument.

They said Sabb, who was a regular at the store, had been playing the slot machine and was getting ready to cash out when there was some sort of altercation with the clerk. They said Sabb tried to leave but was followed outside and shot by Salhout. According to a Miami-Dade police report, Salhout continued to shoot Sabb while he was lying face down on the ground. Sabb was pronounced dead at the scene.

The most recent incidents occurred in Detroit with the first happening at a Citgo Gas Station where an immigrant clerk allegedly came out from behind protective bulletproof glass to shoot a black customer he was arguing with.

Police said a fight between Rami Ali Jabar and a customer escalated to the point when Jabar came out from behind the glass. He is accused of pulling out a gun and firing it, killing an unarmed man.

This was closely followed by a similar incident where an employee was alleged to have also exited from behind protective bulletproof glass to engage in an argument with a black customer before shooting him. The Detroit News acknowledged the racial aspect of the story and admitted that the tension between the black community and the mostly Arab immigrant employees are not new.

In 2001, the Detroit civil rights activist the Rev. Horace Sheffield organized a 30-day boycott of Arab-owned gas stations following a string of incidents including the 1999 beating death of Kalvin Porter, a 34-year-old black electrician, by two Yemini immigrants who were acquitted of murder charges.

These stories remind us that immigrants from third world countries do not miraculously adopt western concepts on things like the justified use of lethal force and instead will most likely retain their native country customs and mores. You can also be assured that as the demographic replacement of the Historic American Nation continues to chug along, these types of internecine feuds among the Coalition of the Fringes will only escalate.