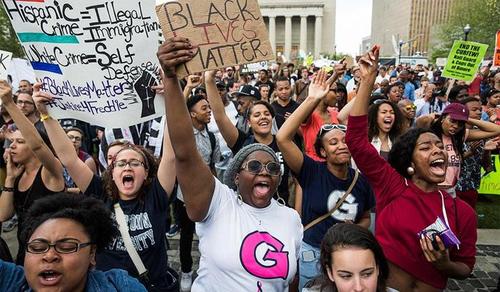 It's About Race, Not Party—Democrats Ban Jefferson-Jackson Dinner

After America's Jacobin moment was unleashed last month, NRO's Kevin Williamson, who has a bad habit of (deliberately) missing the point, blamed the whole thing on partisan hypocrisy.

Of course the Confederate flag is a symbol of Southern racism. It is a good many other things, too, none of which was the cause of the massacre at Emanuel AME. It is strange and ironic that adherents of the Democratic party — which was, for about 140 years, not only the South’s but the world’s leading white-supremacist organization — should work themselves up over one flag, raised by their fellow partisans, at this late a date; but, well, welcome to the party. Yet Democratic concern about racist totems is selective: The Democrats are not going to change the name of their party, cancel the annual Jefferson-Jackson dinner, or stop naming things after Robert Byrd, senator and Exalted Cyclops of the Ku Klux Klan. Hillary Clinton is not going to be made to answer for her participation in a political campaign that featured Confederate-flag imagery. [Emphasis added]

Thomas Jefferson and Andrew Jackson are history in Connecticut.

Under pressure from the NAACP, the state Democratic Party will scrub the names of the two presidents from its annual fundraising dinner because of their ties to slavery.

The decision is believed to be unprecedented and could prompt Democrats in other states with similarly-named events to follow suit.

“I see it as the right thing to do,” Nick Balletto, the party’s first-year chairman, told Hearst Connecticut Media Wednesday night. “I wasn’t looking to be a trailblazer or set off a trend that’s going to affect the rest of the country. Hopefully, they’ll follow suit when they see it’s the right thing to do.”

There isn't a limit to all of this. Conservatism Inc. scribblers like Williamson have to believe what is going on is simple partisan hypocrisy rather than anything deeper. They can't concede that there are primal racial, cultural, and demographic conflicts driving today's political controversies because that would fatally undermine the premises of the modern American conservative movement.

But it's not about party, it's about people. The Coalition of the Fringes that defines the modern Left is only held together by increasingly frantic and overt hatred directed against whites. And contra Williamson, we have not reached "Peak Leftism," or the final stage of frantically displaying your anti-white bona fides to prove how successful, powerful, and moral you are. Many whites will be signaling even harder, desperate to stay ahead of the progressive mob before it devours him. We haven't reached "Peak Leftism."  It's going to get a lot worse.

I predict the Jackson-Jefferson dinners will be renamed nationwide. After all, #BlackLivesMatter.

Furthermore, I think buildings named after Senator Byrd will be renamed, though that may take more time because of the relative paucity of non-white minorities in West Virginia. Ironically, it will probably be the Republicans defending the existing names.

And I believe the Clintons actually will be criticized for their former Southern populism. After all, the Democrats don't need to conceal their contempt for White workers anymore.

In the end, as some have already broached, the Jefferson Memorial itself will come under attack. And, if this hysterical attack on America's past is not turned back ideologically and (perhaps more importantly) demographically, those lines deliberately kept off the Memorial will have been proven correct.

Nothing is more certainly written in the book of fate than that these people are to be free. Nor is it less certain that the two races, equally free, cannot live in the same government. Nature, habit, opinion has drawn indelible lines of distinction between them.” – Jefferson's Autobiography