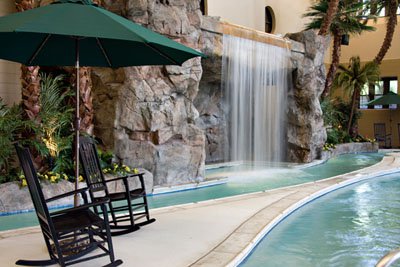 It's a Hard Knock Life at the U. of Missouri

A distant relative is in the swimming pool business and raves about the four pools at the state-of-the-art U. of Missouri recreation center. From the university’s website:

No matter what time of year, it’s always Spring Break in the Tiger Grotto. The Grotto will transform your dullest day into a vacation, with our resort quality facilities and atmosphere that will unwind you, even with the most stressful of schedules.

The Grotto features a zero-depth pool entry with a high-powered vortex, lazy river and waterfall. But, it’s still an apparent hellhole for black students. From the NYT:

At University of Missouri, Black Students See a Campus Riven by Race By JOHN ELIGON NOV. 11, 2015

… Some black students say they are greeted with piercing stares when they walk by white-dominated fraternity and sorority houses. Others mention feeling awkward when other students turn to them in class when discussion turns to black issues. And then there are the tenser moments when white students talk disparagingly about the neighborhoods where many black students come from, whether the South Side of Chicago or the North Side of St. Louis.

Racial Discrimination Protests Ignite at Colleges Across the U.S. By ANEMONA HARTOCOLLIS and JESS BIDGOOD NOV. 11, 2015

The passion that ousted the heads of the University of Missouri after protests over racial discrimination on campus is spreading to other colleges across the country, turning traditional fall semesters into a period of intense focus on racial misunderstanding and whether activism stifles free speech. …

“Systematic oppression affects us all,” said Tyahra Angus, a senior, speaking through a megaphone to the group, a mix of minority and white students.

The environs were a far cry from the University of Missouri. Smith’s undergraduate student body is all women and the institution itself is situated in a progressive college town. It is not in the midst of major upheaval.

But the students who gathered on Wednesday spoke of “microaggressions” — tone-deaf slights directed toward minority students — and continuing difficulties of being a student of color on a contemporary college campus, and encouraged their peers to raise awareness of them.

As Ms. Fowlkes-Witten addressed the group, she stood under an umbrella held by Donna Lisker, the dean of the college.

“I don’t think I ever want to fall into a false sense of security that things can’t happen here,” Ms. Lisker said in an interview after the demonstration, adding, “Being continually reflective about what you’re doing, and listening — that’s why I went today.”

College students are not rebels these days. They’re doing what the Establishment wants them to do.

I wrote about the “microaggression” thing at Smith College and the like 2.5 years ago in Taki’s Magazine. I think I did a good job in “The Cult of Microaggressions,” but I was worried at the time that I was engaged in overkill: obviously, the word “microaggression” was so inherently comic that the concept couldn’t spread beyond the lesbian fringe.

But as I so often am, I was wrong about what people would think sounds cool.

What’s going on at Mizzou reminds me of my 11-year-old article in The American Conservative entitled “Hate Hoax” about the 2004 hysteria over a fraudulent “hate crime” at Claremont McKenna College:

… The most exciting moment during my exploration came when a Frisbee golf foursome politely waited for me to walk by before playing through.

Perhaps all this genteel serenity explains the psychodramas that a sizable fraction of the staff and students seem compelled to concoct for themselves. Just the month before, a long-festering mass hysteria over white racist student-thugs supposedly infesting the campus had culminated in a huge night rally in which thousands of blackshirted students had chanted their hatred of “hate,” while the administration stood by silently, despite knowing that there had been no hate crime, just a leftist professor’s hoax. …

[President] Gann and the conservative professors fought bitter battles over affirmative action hiring. Gann’s frustration with her rightist holdovers seemed to feed into the growing paranoia at some of the other Claremont colleges, where the staffs nurture an obsession among its “diverse” students (i.e., everybody except non-Hispanic heterosexual gentile white males) to navel-gaze over whether or not they feel “comfortable with the climate.”

It was 72 degrees with a gentle breeze blowing, so the climate seemed okay to me, but a flier on Pitzer bulletin boards made the local idée fixe a little clearer: “Diversity and Campus Climate: You are invited to participate in a discussion about campus climate.” Another advertised: “Queer Dreams and Nightmares: What is it like to be a student at the Claremont Colleges? Student panel discussion addressing the current climate at the 5-Cs, both academically and socially.” This was part of a conference entitled, with that profusion of punctuation that is the secret fraternity handshake of post-modern academics, “[Re]Defining a Queer Space at the Claremont Colleges.”

The university’s main concern appears to be to make students feel “comfortable,” a word that reappears constantly in Claremont publications despite the obvious hopelessness of the project. The only way to make 19-year-olds feel comfortable is to wait 30 years while they sag into their well-padded maturities. Right now, they are teenagers and their surging hormones have far more important emotions for them to feel than comfort. Adults, however, who make careers out of encouraging kids to mold permanently self-pitying identities around their transient social discomforts have much to answer for.

A series of semi-nonexistent “racial incidents,” such as liberal Scripps students advertising a racial sensitivity seminar with posters featuring the N-word, were parlayed by activists into a mood of dread.

Kerri F. Dunn, a 39-year-old academic prole, a visiting professor of social psychology at CMC whose contract was up in June, repeatedly harangued her students about the racists and sexists lurking in the shadows. On March 9th, she gave a fiery speech at a campus event on “Hate Speech Versus Free Speech.” She then walked to her 1992 Honda Civic and returned some time later, claiming she had found it spray-painted with anti-black, anti-female, and anti-Semitic slurs. The Irish-American Dunn pointed the finger at her own students, arguing that only they had heard she was considering converting to Judaism: “How else would they believe I was Jewish unless they were in my class?”

Dunn’s allegation triggered a frenzy of fear and loathing. Although faked hate crimes have become routine in the years since the Tawana Brawley hoax, the college presidents immediately canceled the next day’s classes (costing parents paying the full $37,000 per year list price for 150 days of education about $250 each, or close to two million dollars in total at list price).

At the mass rally the next night, Dunn announced, to rapturous applause: “This was a well planned out act of terrorism. And I don’t believe for one second it was one person. I think that there’s a group here, a small group, but I do believe that there is a group here that perpetuates this in all different kinds of ways.” Dunn’s image of a secret goon squad of marauding junior Straussians was as memorable as it was preposterous, but the administration had already been apprised of the unsurprising truth.

Earlier that day, two eyewitnesses had told the Dean of Students that Professor Dunn had slashed her own tires.

Will we ever learn?