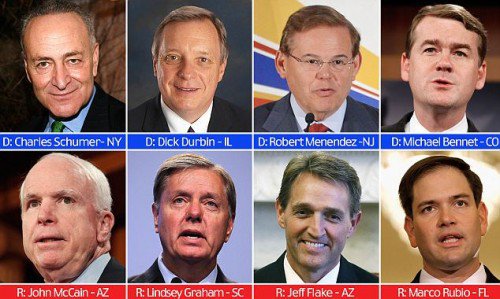 For some odd reason, Senator Marco Rubio wasn’t asked about his sponsorship of the nation-crushing Gang of Eight amnesty bill during Tuesday’s Republican candidate debate. (He is pictured here with his G8 Democrat amnesty mentor, Senator Charles Schumer.)

So National Public Radio helpfully checked in with the Florida senator on Wednesday morning to learn his current views. (After his failure to subvert America, Rubio appeared at conservative venues claiming to have learned his lesson, so updates are recommended.)

You can listen here to the NPR piece titled Sen. Rubio On Immigration: We Can’t Accept Everyone.

Cutting to the chase, here’s the amnesty part, where the highly desired work permit is treated as an afterthought by Rubio:

STEVE INSKEEP: So what is a practical way to deal specifically with those millions of people who are here illegally now?

RUBIO: Well, let me tell you how we can’t do it because we’ve tried and that is in one massive piece of legislation comprehensive. It just can’t happen because the trust of the American people doesn’t exist when it comes to the immigration system. So I think we have to pursue a three-step process. The first step is we don’t just have to pass a law that improves our ability to enforce the law. We have to prove to the American people that it’s working, show them that in fact illegal immigration numbers have come substantially down because we’ve built walls in key sectors of the border, because we have an entry-exit tracking system, because we have E-Verify. After we’ve done that, the second step is modernize the legal immigration system so that it’s merit-based so that people come here legally on the basis of what they can contribute economically, not whether or not they have a relative here living here.

After you’ve done those two things, we’re going to have to realistically but reasonably deal with the fact that we have millions of people in this country illegally. If you haven’t been here very long, or you’re a criminal, you will be deported. Otherwise you will have to come forward, pass a background check, learn English, pay a fine because you violated the law, start paying taxes and you’ll get a work permit. And that’s all you’re going to have for at least a decade. In my mind, that is the best way forward on this issue and in my mind it’s the only way forward on this issue.

So the immigration policy proposed by the supposedly chastened Rubio is for the illegal alien to present himself and immediately receive his work permit — which is the holy grail for alien job thieves. They come to make lots of dollars by stealing American jobs, not vote in US elections. The media chatter about a “path to citizenship” is a planned distraction so Americans won’t understand the issue and motivations. The Democrat party and la Raza certainly want citizenship for illegal aliens to make them big-government voters, but the millions of invaders don’t want to become Americans: most retain the identity of their homelands. For example, Pew research found only 21 percent of hispanics self-identify as Americans.

How do we know that illegal aliens don’t care about American citizenship? We can judge from previous behavior. Only 40 percent of the 1986 cohort of 2.7 million who got amnesty with legalization and work permits chose to become citizens. They got the right to take US jobs and that was all they cared about.