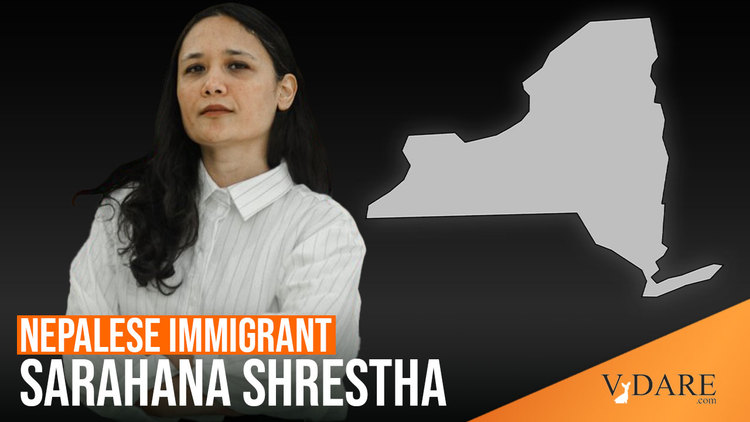 Earlier: A Reader Writes On Congressman Joe Crowley, A "White Guy" Who Lost His Job To A Minority (I.E., AOC)

Anyone who has read Alien Nation, published back in 1995, or VDARE.com since it went online in 1999, knows that the large influx of immigration to America would inevitably drag our politics leftward, but this article published by the Times Union in New York's Hudson Valley tries to portray this shift in the political landscape as something totally organic, which they attribute to "climate activists."

Some climate activists were already tired of waiting for elected officials to make good on the state’s climate commitments. This year, a slate of socialist candidates are running for state office under the banner Green New York, hoping to bring transformative change to what they see as a dire situation in Albany. Two of them are in the Hudson Valley.

“We got our Democratic supermajority, we kicked a lot of the fake Democrats out and what we expected did not happen,” said Sarahana Shrestha, candidate for the 103rd District. “So we [decided] we need to take it to the next level, where we put our own people in office.”

Shrestha is a member of the Mid-Hudson Valley chapter of the Democratic Socialists of America (DSA) and one of 13 DSA candidates who received an endorsement from U.S. Rep. Alexandria Ocasio-Cortez, herself a DSA member. Nine of them are running for New York State Assembly.

But if you continue reading the article, you'll discover that the featured candidate, Sarahana Shrestha, is an immigrant from Nepal who only came to America for college but never left and then was naturalized shortly before running for office.

Shrestha is a first-generation immigrant from Nepal who came to the United States in 2001 to attend the New York Institute of Technology. She grew up during the People’s Movement, a coalition of various communist, leftist and democratic parties that overthrew Nepal’s absolute monarchy and installed a constitutional monarchy.

“I had this sort of anti-establishment streak when I was growing up,” said Shrestha, who now lives in Esopus. “I definitely still have that — basically just questioning why things are set up the way they are. Those in power are usually neglecting everyday people who need things to survive.”

In 2019, Shrestha became a U.S. citizen and officially joined the DSA, waiting until after she was naturalized because she feared that it might get held against her in the process.

The other featured candidate, Vanessa Agudelo, might even be an anchor baby.

An hour south and on the other side of the Hudson River, [Vanessa Agudelo] is running in a district that includes Ossining, Briarcliffe, Croton, Cold Spring and parts of Yorktown — the same town where Ocasio-Cortez grew up.

“The thing that distinguishes me from the other candidates is that I’m the only one who recognizes corporate interests and inequality being at the crux of these larger issues.”

Read the write-up at @timesunion!https://t.co/iQHpV4piwS

Agudelo is the daughter of Colombian immigrants who met in Queens and then moved to Ossining, where she was born.

The article did address the racial demographics of some areas within the candidates' election district where they're running for office.

Shrestha and Agudelo are running in races with their own racial and socioeconomic complexities. Ossining is 35% white, 12% black and 25% Hispanic, while Kingston is 63% white, 14% black and 8% Hispanic.

Both non-white Far Left immigrant candidates are running against elderly white Democratic incumbents who have been in office forever. The Great Replacement is coming for Democratic incumbents too! I predict that Shrestha and Agudelo will actually do well with non-white voters in the primary even though they might not ultimately win, since the overall assembly district contains enough areas that are still too white and whites are typically more diligent about voting in primaries.

But give the Democrats more time and they'll change those demographics. Then Far Left DSA candidates will be able to easily win Democratic primaries, as demographics are destiny. But don't expect the Times Union to honestly report that undeniable fact when it happens. They'll instead be trying to convince their readers it was due to "climate activists."