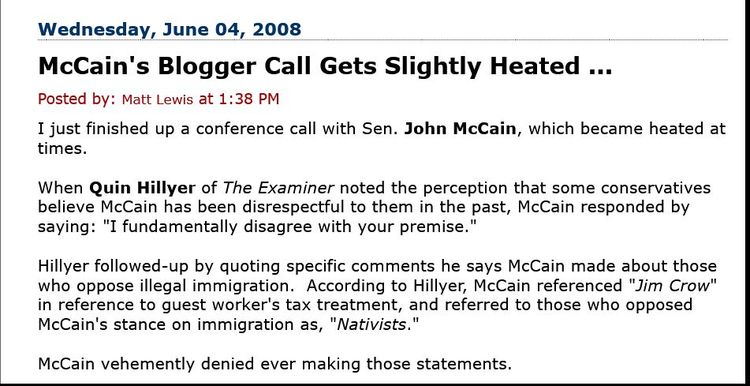 It Depends On What Your Definition Of "Jim Crow" Is

During a conference with bloggers, Quin Hillyer of the Washington Examiner asked McCain to explain why "during the immigration debate, you referred to [amnesty] opponents to nativists and compared them to supporters of Jim Crow?"

McCain responded, "I've never said that. Please don't allege that. I'm proud of the way I've conducted myself and treated opponents with respect, whatever their views. I have to stop you there. I've never used those two words before that I can recall."

Well he didn't specifically say "Jim Crow, " but on the Senate floor he sarcastically asked amnesty opponents, "what next, are we going to say that work-authorized immigrants are going to have to ride in the back of the bus?"

According to the New York Observer, in a 2006 in front of a group of donors "[McCain] criticized elements in his own party as "nativist" before lambasting the punditry of Rush Limbaugh, Lou Dobbs and Michael Savage for helping to "fuel the problem,"

If we can give McCain credit for something, it's that he has yet to accuse Dobbs and Limbaugh of causing hate crimes like Barack Obama who told a group of donors a few weeks ago, "There's a reason why hate crimes against Hispanic people doubled last year. If you have people like Lou Dobbs and Rush Limbaugh ginning things up, it's not surprising that would happen."