Israel's Netanyahu: "We Don’t Have To Open Our Doors To Be Swamped" 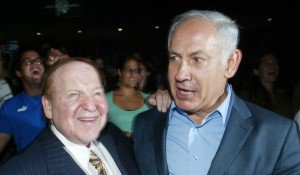 Last week yet another Imperial progress to America by VDARE.com hero Benjamin Netanyahu wound up with meetings in New York, including a lunch hosted by GOP Owner Sheldon Adelson which was not well received in Israel: PM roasted for non-kosher meal with Adelson The Times of Israel September 30 2014 (H/T TOI for above picture. Current photographs of the two men together do not seem to be available.)

So H/T to the remarkable website Failed Messiah for drawing my attention in Israel's Prime Minister Deceives About African Asylum Seekers to The question Netanyahu would prefer to duck by Anshel Pfeffer Haaretz Oct 2, 2014

As he addressed a friendly gathering of Jewish federation members in New York on Tuesday, Prime Minister Benjamin Netanyahu probably didn’t expect to be put on the spot by a question

Asked whether he was concerned that the imprisonment of “asylum seekers” would damage Israel’s international image, he responded sternly that “there is no asylum-seeker problem in Israel – they are illegal job immigrants.” He added that Israel, like every country, has the right to control its borders

You there, Nancy Pelosi? NB: The question implied not that Israel's policy was wrong, just that it might damage Israel's "international image."

“We don’t have to open our doors to be swamped by the way other people run their economies,” he responded

Host Sheldon Adelson effortlessly asserts one rule for Israel and another for America.

But less selfish observers will applaud Netanyahu for looking after his countrymen.