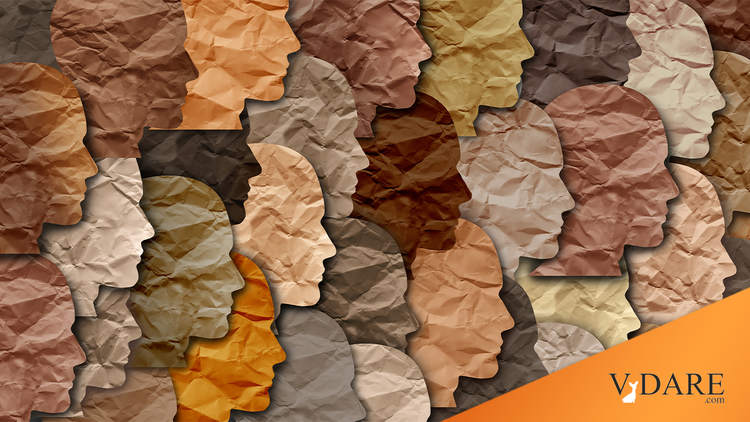 Is There More Diversity Within or Between Races?

2. An emerging orthodoxy holds that race is a social construct and thus a poor proxy for genetic diversity. This view holds that since genetic differences between racial groups are trivial, research on genetic contributions to racial disparities will be fruitless.

These tweets document how 21st Century genetic tests can predict what race people will self-identify as belonging to with 95%-99% accuracy.

15. Given that the vast majority of human traits, including health and disease related traits, are influenced by multiple loci, these findings have important implications for genetic contributions to racial differences of all kinds.

Somebody brings up a common and not terrible argument: there is more diversity within races than between races.

Because I sort of agree with that proposition, I’d be slightly less unpopular if I dogmatically repeated it on all occasions: “There is more diversity within races than between races!”

But … that’s clearly not true for all traits. Moreover, I don’t really know how to test whether it’s true on average. It seems more scientific to both look for examples that support and examples that invalidate that assertion. If you are open-minded, you can find all sorts of interesting and pragmatic patterns.

It depends upon the traits. For some things -- e.g., heights of Pygmies vs. Dinkas, there isn't much diversity within hereditary racial groups. For other traits, more within.

A useful analogy: think about traits among siblings and cousins. Race is like family, but less so.

Manute Bol was taller than his fellow Dinka NBA player Luol Deng, as is Manute’s son Bol Bol. So, there is much diversity of height within the Dinkas of South Sudan.

Still, the 2nd percentile Dinka in height is likely taller than the 98th percentile Pygmy.

So you can keep burrowing ever deeper into these kind of questions, generating interesting and sometimes useful knowledge (especially useful in our Age of Kendi when every statistic at which whites have an advantage, such as winning more Olympic swimming medals, is assumed automatically to be proof of evil white racism).

On the other other other hand, there is a fair amount of diversity in average phenotypic height between white Americans versus Asian-Americans and Mexican-Americans. But nobody much cares about those kind of differences.

Here’s a way for baseball fans to think about diversity within races vs diversity between races: Most African-American baseball Hall of Famers were quite fast runners (e.g. Ricky Henderson, Lou Brock, Tim Raines). So the stereotype of African-American as fast is, on the whole, true. But it’s not foolproof: I believe at least 5 black American Hall of Famers were well below major league average in footspeed: Willie McCovey, Willie Stargell, Roy Campanella, Harold Baines, and Frank Thomas.

Here’s a recent article from Hardball Times updating Bill James 1987 innovation of Speed Scores, in which baseball players are rated on 6 factors that indicate footspeed

The Fastest Player in Baseball (Revisited)
by Jared Cross

(1) success stealing bases, (2) propensity to steal, (3) ability to leg out triples, (4) ability to score once on base, (5) ability to beat out double-play balls and (6) defensive range 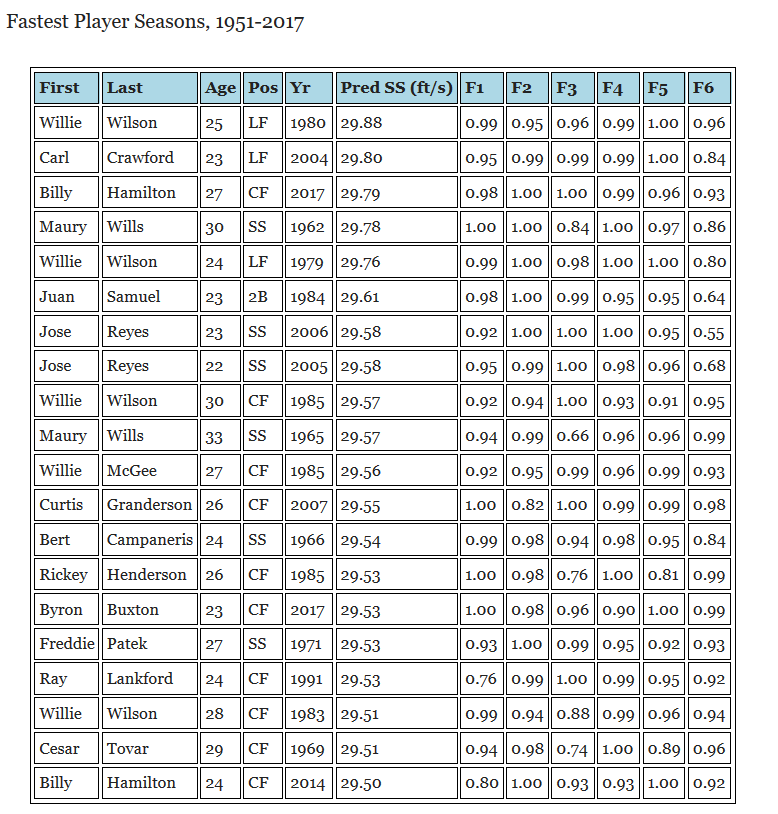 Out of these Top 20 fastest seasons, 5’4″ Freddie Patek is white. Bert Campaneris of Cuba is beige with wooly hair. Everybody else is more or less black. 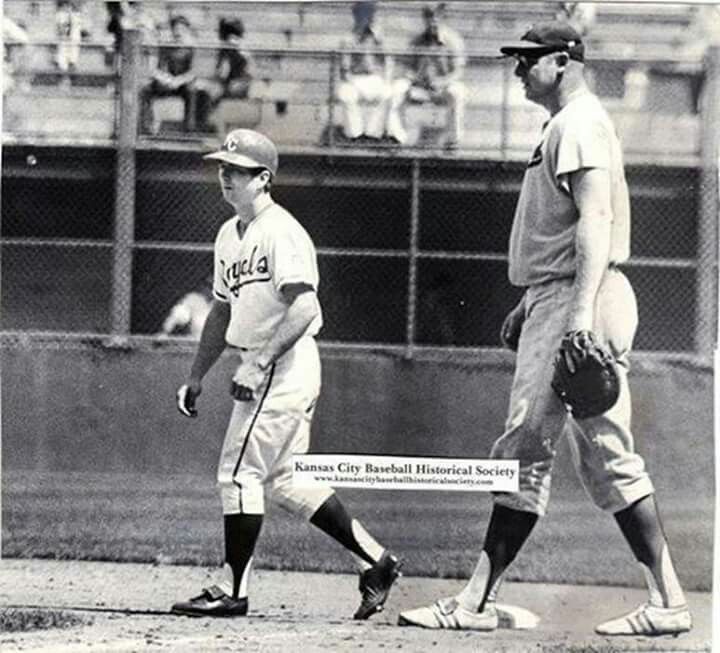 There are some park effects on speed: Willie Wilson in Kansas City in 1980 was playing on hard Astroturf, but yeah he was really fast. That was the year that George Brett averaged more than 1 RBI per game and one reason was because Wilson was flying around the bases when Brett would hit the ball. Patek’s fast season came at Kansas City too.

And here are the slowest seasons since Willie Mays arrived in 1951: 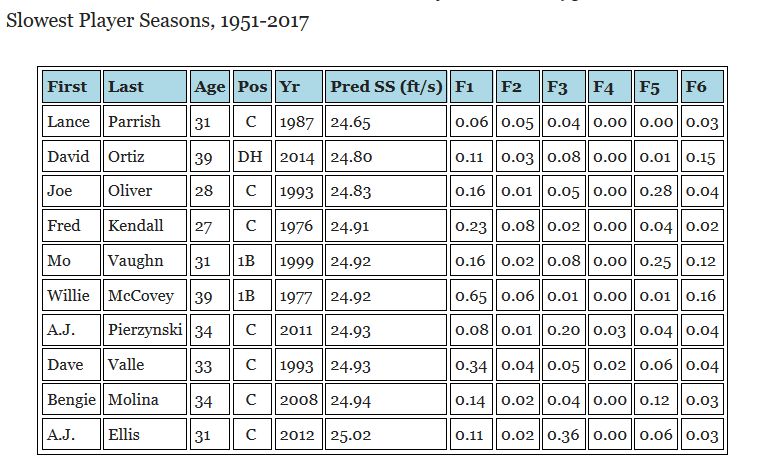 McCovey and Mo Vaughn are African-American, David “Big Papi” Ortiz is a black Dominican, and Bengie Molina is a mulatto Puerto Rican. The other 6 are white.

So, the point is that the racial stereotype that the blacker the faster is fairly true in major league baseball, but are there are definitely exceptions.

It’s worth pointing out that just about every sports fan more or less knows this racial stereotype is true, and yet, amazingly, the world has not ended. Contrary to the conventional wisdom, sabermetricians have not therefore reanimated Hitler’s skull.

Another useful analogy: think about traits among siblings and cousins. Race is like family, but mostly less so, although for some traits (such as skin color) more so.

Diversity within races is kind of like diversity within families. E.g., in baseball history, there were 3 DiMaggio Brothers in the 1940s from San Francisco and 3 Alou Brothers in the 1960s from the Dominican Republic, but they had different profiles. Singles hitter Dom DiMaggio was, arguably, more like singles hitter Matty Alou from a baseball statistics perspective than he was like Vince DiMaggio, who swung for the fences and struck out a lot.

Of course, anybody who makes the big leagues is a 99th percentile baseball player relative to the general population.