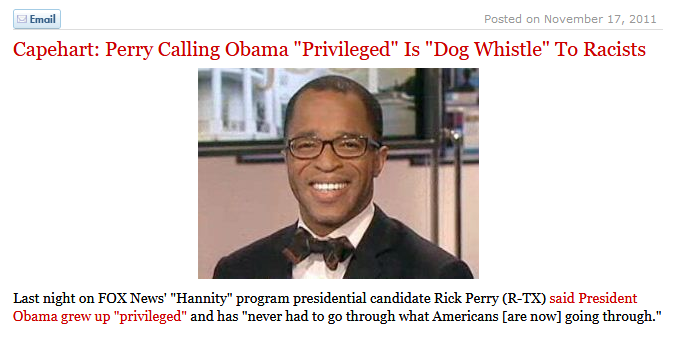 I saw this on Drudge:

He's talking about this:

"Last night on FOX News' ‘Hannity’ program presidential candidate Rick Perry (R-TX) said President Obama grew up ‘privileged’ and has ‘never had to go through what Americans [are now] going through.’

Perhaps Gov. Perry was referring to Obama's upbringing and the educational institutions he attended. However, according to the Washington Post's Jonathan Capehart this comment was a ‘dog whistle’ for racism.

‘That's the dog whistle that Rick Perry is going for. The president was not raised privileged. He wasn't handed anything. He absolutely had to work for everything that he got. But for Rick Perry to say that President Obama was privileged and didn't have to work for what he got, the code is, he got into Columbia University, he got into Harvard University not through merit, not because he's smart, but because he took the place of someone else through affirmative action, that someone else being someone white,’ Mr. Capehart said on Martin Bashir's MSNBC show.."

Even in the non-racial sense, Obama is as privileged as anyone not called Bush, Kennedy, or Rockefeller:

All of that is remarkably similar to what people call "white privilege," and is as legitimate as attacking George W. Bush on the same grounds.

Capehart is also wrong to think that Perry is attacking Obama as an Affirmative Action case—Perry doesn't have the nerve.

Then McCain, his Republican opponent, more or less threw the election by refusing to fight, giving him a free pass to the Presidency.

All of this is as legitimate an issue for Perry to raise as, say, former Governor Bush's relationship with Bush Senior, but it won't be raised by anyone in the GOP.