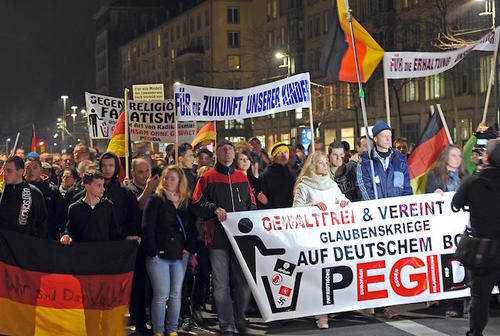 Above, a PEGIDA march in Dresden. The front banner reads “Nonviolent and united against religious wars on German soil.” The sign behind that says, ”For the future of our children.”

Chancellor Angela Merkel has big resettlement plans for Germany, whether the German people want 800,000 mostly Muslim illegal aliens or not. An uprising happened in the town of Heidenau over the weekend because of government plans to deposit 600 foreigners of unspecified origin, although one Afghan newbie was quoted in a press account.News reports say 30 police were injured in the riot, although there is no mention of any civilians being hurt, which is odd.

Naturally, the press is full of shrieking about neo-nazis, but that characterization is not completely convincing.

A little backstory is in order here. Heidenau is just a few miles from Dresden, which has been the site of peaceful Monday-night marches of the PEGIDA group since last October. The name PEGIDA stands for Patriotic Europeans against the Islamization of the West (Patriotische Europäer gegen die Islamisierung des Abendlandes). Photos of marchers all show families, young and old — definitely not a skinhead crowd.

So the local people have been peacefully demonstrating for months against the Islamization of Germany caused by legal and illegal immigration, but the government has ignored them completely by its resettlement behavior. A little violence did get the attention of the big suits in Berlin however.

It’s outrageous that European elites intend to welcome historic enemies inside the gates at considerable danger to the people, and do so while castigating anyone who objects. A poll from last January found that 57 percent of Germans believed Islam was a threat, and that survey was taken before the shocking Charlie Hebdo mass murder of a dozen people in Paris by jihadists.

Angela Merkel has admitted that multiculturalism is a failure, but she continues to shove an unrealistic ideology down the throats of the citizens, and it’s hard to see why. Is her aim to preserve the borderless European Union, no matter what? The violence is only beginning, and the newcomers are the ones to fear, not the Europeans.

Meeting for the first time after the political summer break, the leaders of Europe’s two biggest economies elevated the refugee crisis to a top priority Monday, placing it alongside challenges such as the conflict in Ukraine.

With Germany expecting as many as 800,000 people fleeing war and poverty to arrive this year, street violence and arson attacks on empty asylum shelters are raising pressure on Merkel to find solutions and take a stand. After police guarding a refugee shelter were attacked by protesters for three consecutive nights, she condemned the outbreak of “anti-immigrant hatred” in the town of Heidenau near Dresden.

“The way in which right-wing extremists and neo-Nazis voice blunt expressions of hate is repugnant,” Merkel said. “But it’s just as shameful the way citizens, and even families with children, support these things through collaboration.”

Joining Forces Merkel and Hollande sought a joint position for tackling the crisis, saying the burden of aiding refugees needs to be shared fairly among the 28 EU countries. Both pressed the EU to set up registration centers for refugees and asylum seekers in countries such as Greece and Italy.

“This must happen quickly, this year,” Merkel said. “We can’t accept any delays.”

Germany’s annual cost of caring for refugees may be 10 billion euros ($11.6 billion) this year, compared to 2 billion euros in 2014, Die Zeit reported, citing its own calculation based on an estimated 800,000 arrivals.

German Vice Chancellor Sigmar Gabriel rearranged his schedule to visit Heidenau, where demonstrators shot fireworks and lobbed bottles at police over the weekend after a rally against a former home-improvement store serving as a refugee shelter. More than 30 police officers have been injured, Deutsche Presse-Agentur reported.

‘I’m Afraid’ “I had heard a lot about Germany,” Hassan Hassani, 20, an Afghan refugee who was sent to the town after arriving in Germany via Iran, Turkey, Greece and Macedonia, told reporters. “I want to complete my education, which I can’t do in Afghanistan. I was afraid there. Now I’m afraid here.”

Almost 340,000 migrants tried to enter the European Union in July compared to 123,500 a year earlier, the EU border-management agency Frontex said on Aug. 18. The biggest number was reported in the Aegean Sea, mainly on the Greek islands of Lesbos, Chios, Samos and Kos.

“It’s a huge disgrace that the majority of member countries says this isn’t our problem,” Gabriel said in an ARD television interview Sunday. “Regressing to a Europe without open borders would have economically catastrophic consequences, as well as politically and culturally.”