Zeituni the Moocher Pops Up in Boston 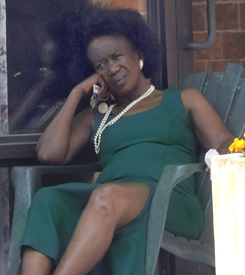 The press has characterized Obama's illegal alien aunt as a sad case, presumably worthy of American welfare benefits, which she has been unlawfully receiving for years. The Boston Globe described her as a "frail-looking woman in her late 50s who walks with a cane" (Obama's aunt back in Boston for deportation hearing).

But a recent interview revealed Auntie Mooch to be looking good, and more or less satisfied with her life on the dole, courtesy of the American taxpayer. She appears happy enough, wearing a fashionable dress and pearls with a bit of leg showing.

With her deportation hearing still six months away, the controversial Kenyan aunt of President Obama has quietly resurfaced in public housing in South Boston, the Herald has learned.

"Beggars can't be choosers," Obama’s "Auntie Zeituni" Onyango, 57, told the Herald yesterday with a mischievous smile, wearing a string of pearls and a sleeveless forest-green sheath she said her nephew bought her years before he became leader of the free world.

"I'd like to live in a castle and have a limousine," she said, "but I don’t. My wealth is my health."

Zeituni Polly Onyango, the half-sister of Obama’s late father Barack Obama Sr., moved into a discreet apartment complex this past month while she waits to fight a Feb. 4, 2010, removal proceeding brought against her by the Department of Homeland Security in U.S. Immigration Court in Boston.

Onyango, a computer programmer, was ordered to leave the country in 2004 after her request for political asylum from the violence in Africa was turned down. Instead, she stayed illegally and was revealed to be living in government-subsidized housing on Flaherty Way in Southie last October by The Times of London during the final stretch of Obama’s run for the White House. [Barack Obama’s aunt at home in Southie digs, Boston Herald, July 31, 2009]

See, those de luxe American welfare goodies are just too nice to resist.