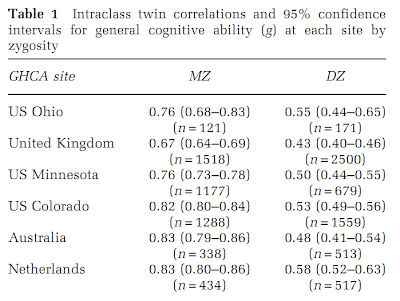 But now that we have inexpensive genotyping, we can study heritability of a quantitative trait by looking at unrelated (or only distantly related) individuals, and asking to what extent similarity in genotype is correlated with similarity in phenotype. A simple way to think about this is to imagine that we have a sample of N people for whom both phenotype (measured g score) and genotype (e.g., SNP profile) are known. Form all possible pairs and plot magnitude of difference in g score against genetic distance between the individuals in the pair. The g score difference should (on average) decrease as the genetic distance goes to zero (at which point the pair are MZ twins; but we avoid the confound of shared prenatal environment). Even if we have no identical twins in the sample, and even if none of the people in the sample are closely related to each other, we can extrapolate to zero genetic distance to obtain an estimate of heritability. An analysis along these lines (more technically, a global fit across all SNPs of total heritability) for height yields a result which is consistent with the narrow sense heritability estimate from twin and adoption studies. The results for g have not yet been published, but rumor has it that they also support earlier estimates such as those given above.

Hsu points out that one way to look into the Flynn Effect would be to find elderly people whose IQs were measured for military enlistment / conscription purposes in the middle of the 20th Century.